Today marks the 75th anniversary of ‘Victory in Europe Day’. The day when Nazi Germany accepted the unconditional surrender of its armed forces.

A few days later the West London Observer reportedthat: ‘A brilliant sun heralded the day, throughout, which large crowds assembled in the main thoroughfares. A wireless loudspeaker installed on the roof of Palmer’s Stores blared out music and announcements during the morning.’

Winston Churchill’s speech from Downing Street was broadcast to the nation at 3pm, which was followed by the Mayor of Hammersmith, Councillor F. Brader, with members of the Borough Council and others, assemblingon the steps of the main entrance of the Town Hall in King Street, to address a large and enthusiastic crowd.

He went on to say that: “The people well deserved the two days holiday, which had come with the cessation of hostilities in Europe, and he felt sure that they would enjoy that holiday in an appropriate way.”

The Town Hall was decorated with flags and banners. A loudspeaker van toured the area giving announcements of the organised celebrations that were to follow.

During the afternoon the Hammersmith Borough Band played on Shepherd’s Bush Green and there were reports of impromptu dancing in Ravenscourt Park. 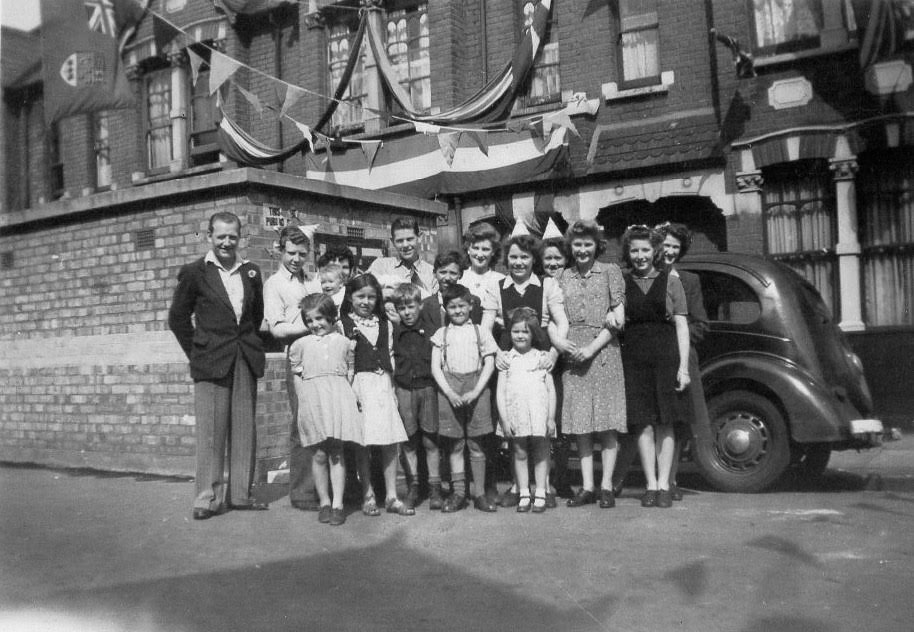 ‘Pianos and wireless sets, radio-grams and loudspeakers provided music for the dancing, nor had the children been forgotten, as street parties had been hastily organised early in the afternoon so that kiddies should have their own share of the national rejoicing. Joyous folk were everywhere…’

Many Londoners headed for Buckingham Palace and Trafalgar Square.

‘As darkness approached people illuminated their houses, some with ordinary electric light bulbs and others with more ambitious colour schemes with twinkling fairy lights in “V” and various other attractive designs.

At 9pm, King George V1 made his broadcast to the Nation.

‘Many factories and other public buildings were also floodlit, and these together with the hundreds of street bonfires, made an impressive sight to a people who had groped about in an enforced “blackout” for more than five years.’

At 10.15pm the Mayor set alight a huge bonfire on the open space alongside the river at the south end of the Town Hall. By midnight vast crowds were dancing in Hammersmith Broadway. 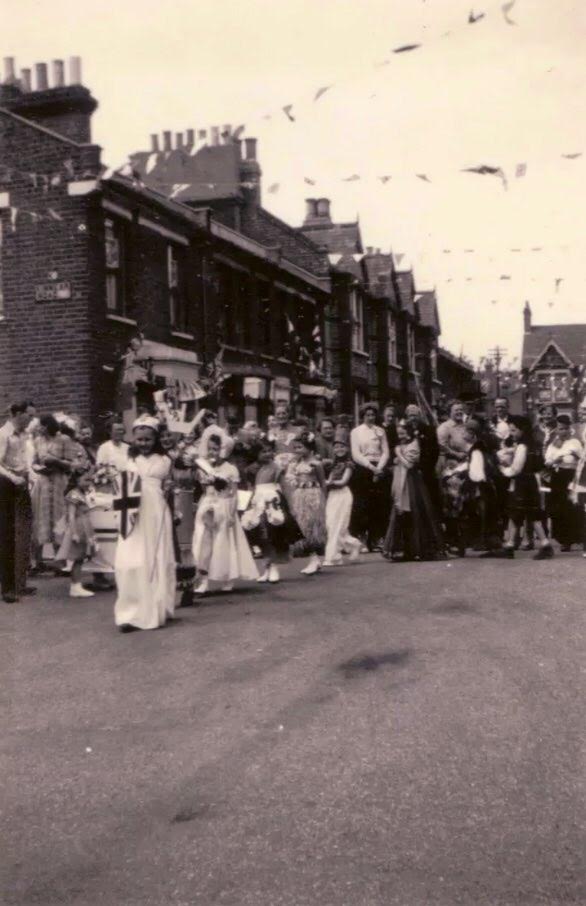 The West London Observer also reported that: ‘On the second day of the celebrations, a dance was held at the Lime Grove Baths, which was attended by the Mayor, the dancing being from 8pm to midnight.’

A thanksgiving service was planned for Sunday morning at the Hammersmith Parish Church and in the afternoon a non-denominational service was to be held at the Ravenscourt Park bandstand. Whilst on Whit Monday a Victory Ball was scheduled for Lime Grove Baths.

As for my family, they were living in Rylett Road at the time. Dad was still in the Army and my elder brother remembers that there was a street party in Rylett Crescent.

However, celebrations for some were put on hold as the War in the Far East lingered on.

(Thanks to Colin Woodley for forwarding me the newspaper articles and also to Peter Trott and Elaine Blagrove for their assistance. The top image shows many of Peter’s family in Thorpebank Road and the bottom one is from the Hammersmith archive and features the street celebrations in Stronsa Road)