Born in Leicester on 12th July 1958, Michael’s league career started with Preston North End and he later played for Manchester City and Brighton.

In December 1984 Michael moved from Liverpool to Loftus Road for a fee of £100,000. His debut for the R’s was later that month at Stoke on 29th December when he came off the bench to replace Johnny Byrne.

His first start was against Sunderland at Loftus Road a couple of months later on 23rd February. Michael went on to make twelve 1st team appearances that season and his only goal was during the home game against Leicester City.

Establishing himself in a midfield role the following season, Michael came off the transfer list at his own request and said: “I enjoy it very much, I’ve played up front for 12 years. I’m not saying I’m stale or was just going through the motions, but I find this new position a challenge. I hope there is a future for me there.”

Michael made 33 League and Cup appearances during the 85/86 season and amongst his five goals was THAT one at Stamford Bridge in the League Cup quarter-final replay on the 29th January.

Alan McDonald’s header had put the R’s one-up in front of thousands of delirious Rangers fans. Michael had gone down several times with cramp, but a minute or so from the final whistle Niedzwiecki advanced out of his goal and lost the ball to Gary Bannister near the half-way line. The R’s No.9 passed to Michael who then looked up and struck the ball 50 yards into an empty net!

Michael was stretchered off in the next game against Forest and needed an operation on two small fractures in his cheekbone, so had to miss the semi-final, 1st leg against Liverpool. 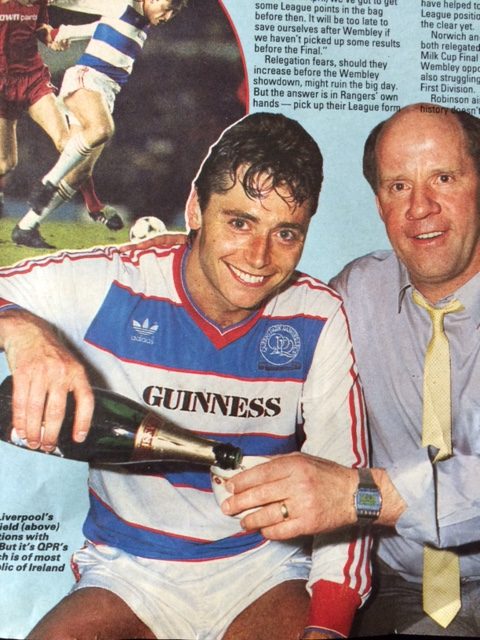 However, he managed to play in the 2nd leg at Anfield and during the game when Liverpool were awarded a penalty, he was on hand to offer some good advice to Paul Barron, who then made a great save near the right-hand post!

He had also put Gary Gillespie under pressure, which resulted in the Liverpool defender putting the ball in his own net for the R’s second goal.

Michael also played in the 6-0 win over Chelsea later that month and in April, Rangers beat Leicester City 4-1 at Filbert Street and scored one of the goals.

The following season Michael made a further 13 appearances for the R’s before being transferred in January to Osasuna for £150,000.

In his interview with Michael Wale in December 1985 he had described his other interests at the time: “I’m interested in shares and stuff like that. But my biggest interest is in good wine and food.”

He gained 24 caps for the Republic of Ireland and scored four goals.

He went on to work as a television pundit, commentator, presenter etc. and Michael also did various TV Ad and feature film voice-overs.

In December 2018, Michael revealed on a Spanish radio show that he had advanced melanoma skin cancer.