On 2nd May 1964 West Ham took on Preston North End in the FA Cup Final at Wembley. Whilst at Loftus Road at 10.30 that morning the Rangers Juniors faced Chelsea in a South East Counties League title decider.

A match report titled: ‘The Kings are dead! Long live the Kings’ appeared in the Hammersmith & Shepherd’s Bush Gazette the following week:

‘Chelsea’s seven year-old reign as supreme rulers of junior soccer in London came to an end on Saturday.

Undaunted by their opponents’ remarkable record or superior size the junior giants of humble Third Division QPR were the confident masters of both skill and stamina at Loftus Road on Saturday and deservedly beat Chelsea 2-1.

So the South East Counties Championship comes to Rangers for the first time in the club’s history and Chelsea surrender the trophy they have had sole possession of since 1957.

Cup Final day was a fitting time for the Rangers’ boys to clinch this title and collect their trophy and medals from League President, Mr Ambler amidst the jubilant rejoicing of their 2,000 odd fans.

It was also a fitting end to a wonderful season for these lads in which they also reached the semi-finals of the nation-wide FA Youth Cup.

Their success is a just reflection on the great work done by their manager Derek Healey, coach Jimmy Andrews and chief talent-finder Charlie Faulkner. Not forgetting the help and encouragement they receive from Alec Stock, the directors and senior players. 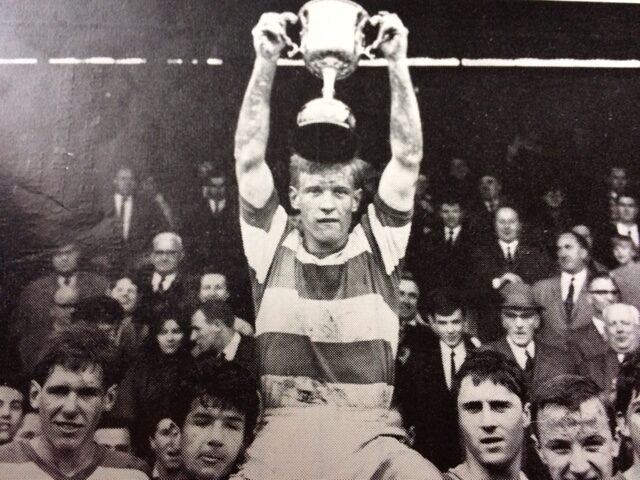 After beating Watford 3-1 and Charlton 3-0 earlier last week, Rangers only needed one point from Saturday’s game to clinch the title. But right from the kick-off it was apparent that they wouldn’t be satisfied with anything less than two.

First man to make his mark on the game was tireless 18-year-old Seth Vafiadis, veteran of 60 games for Rangers’ sides this season, who less than 15 hours before had put in 90 minutes of all-out effort for the first team against Walsall.

A Stamford Bridge reject, inside-left Seth soon showed Chelsea what they had missed. Breaking away from the half-way line he streaked down the left-wing, left full-back and wing-half completely beaten by a neat exchange of passes with Ian Morgan, and cracked over a hard, high centre, which flying leader Mike Leach came closer to heading home.

Well supported by wing-halves John Blake and George Jacks, Rangers’ front line had the Chelsea defence at full-stretch with some fast, free-flowing football and from one slick move between Sibley and Roger Morgan on the right, Vafiadis was only inches wide with a first time shot on the turn.

A big, fierce tackling side, Chelsea’s style was more direct and always looked dangerous in lightning breakaways. In fact, although Rangers had more of the play, Chelsea might have been three up in the first 25 minutes.

Springett’s first let-off came when inside-right Scott headed goalwards from left-winger Houseman’s corner. The diving ‘keeper could not reach it, but quick-covering Bobby Nash turned it off the line.

An even luckier escape came when a long through ball put centre-forward Osgood clear of the defence. He easily evaded Springett’s desperate dive but his somewhat hasty shot hit the post and rebounded clear.

A similar move saw Scott dribble round the stranded Springett only to shoot weakly, allowing skipper Jacks to race back and run the ball round for a corner.

Despite these narrow squeaks, Rangers still looked the more purposeful unit and in the 28th minute took the lead. Racing through with only the goalkeeper to beat, Leach was tripped from behind by left-back Hollins, and right-back Tony Hazell scored from the resulting penalty.

Chelsea had a chance to equalise almost immediately when Nash felled their right-back Henderson. The latter’s free kick was perfectly placed for Osgood to head home, but the centre-forward missed the ball altogether.

Chelsea’s goal had some narrow escapes too. Only a fine save by ‘keeper Willis kept out Jacks’ snap shot in a goalmouth melee and just before half-time Willis only just got his fingertips to an atom-powered Hazell free kick.

It was still anybody’s game and Alec Stock commented to me during the interval that on the gluepot pitch the heftier Chelsea lads must be favourites.

But seven minutes after the re-start a brilliant goal by George Jacks put the game right in Rangers’ pocket. Storming through from the half-way line, George sent the whole Chelsea defence going the wrong way and they waited for him to pass. Instead he kept going and crashed an unstoppable shot past Willis.

Chelsea reduced the deficit in the 67th minute, when from Scott’s long, low cross, inside-forward McCalliog did the splits to turn the ball past the wrong-footed Springett.

The fear Chelsea would last the pace better on the heavy ground proved unfounded. Urged on by the inexhaustible energy of Tony Hazell, the Rangers boys played themselves and their hearts out.

Even lightly built wingers, Roger and Ian Morgan were prominent right until the end and both came close to scoring. Roger was particularly unlucky. His sizzling left-footed drive on the return from brother Ian’s centre looked a winner all the way, but unnaturally spun off the inside of the post and back into play.

A great triumph for these eleven lads and the others sitting on the touchline such as, Bellotti, Gale, Parker, Brooks, Moughton and Wenham, who have all played a part in the side’s success. Rangers’ future certainly looks bright.’

So the R’s finished top on 52 points from the 30 games, four ahead of Chelsea and 13 more than Arsenal in third place.