The programmes were very limited and not surprisingly they sold out very quickly.

Mansfield had beaten Doncaster 4-3 in Round One and then went on to defeat Rotherham 4-2 after extra time.

The first shot on target came on nine minutes from the home side when Ethan Hill’s audacious 35-yard free kick, was comfortably saved by Max Little.

Two minutes later Mr Watson booked Hamzad Kargbo. A needless yellow card for the R’s striker who wouldn’t move back ten yards to allow a free kick to be taken.

The Stags No.4 went close when he curled his 25-yard effort just past the far post.

Whilst at the other end, Lemar Griffiths put the ball in the net from Hamzad Kargbo’s knock down, but it was ruled out for offside.

Rangers really should have taken the lead shortly after when the same two players combined again. Lemar Griffiths took off on a good run and then sent over a great cross, which the R’s No.9 headed wide.

There was some excellent play from Trent Mahorn after he had taken a quick throw-in. The R’s captain then received the ball, went past a defender and up to the bye-line where he won a corner.

After knocking the ball past Junior Paiva, the Stags No.7, Rio Molyneaux, shot low and the ball narrowly evaded the far post.

Minutes before the break, a dangerous cross from the left-wing resulted in Hamzad Kargbo and the Mansfield keeper, Maison Campbell, both staying down and requiring attention.

The on the stroke of half-time the R’s striker prodded the ball just over the crossbar. It remained goalless at the interval. 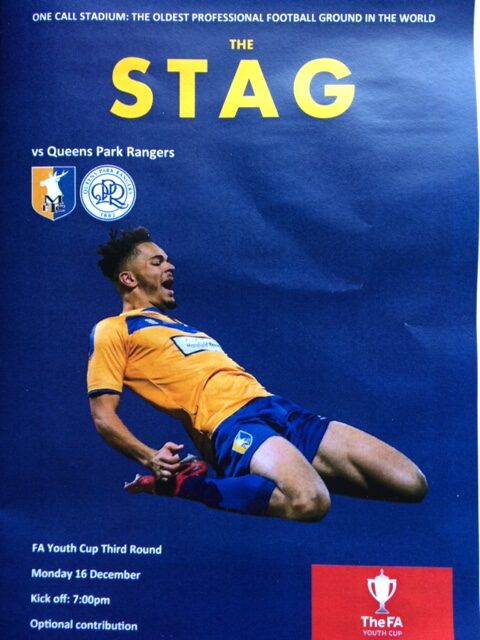 Early into the second-half, Paul Furlong brought on Riley Cotter in place of Stathis Kalathias.

Passes were going astray and it took a while for either goalkeeper to be troubled.

It was Max Little who denied Jimmy Knowles with an excellent save from his thunderous shot, which then saw the ball go behind for a corner.

Moments later Shamar Lawson forced the R’s keeper into superbly tipping the ball onto the crossbar. The ball went down close to the goal-line before being cleared to safety.

The home side were certainly in the ascendancy and their next effort was scrambled into the net, but was ruled out seemingly for a handball.

An R’s defender made an outstanding block after a Stags player had pulled the trigger from close range.

Chimaechi Eze was introduced on 83 minutes at the expense of Lemar Griffiths.

Two minutes later Armelindo Mema went on a great run down the left and into the box before setting up Hamzad Kargbo who thumped the ball goalwards. Kian Sketchley made an excellent block, sending the ball behind for a corner.

It seemed that Rangers had won the game in the 89th minute when Kargbo turned Nathan Saunders on the edge of the box and belted the ball high into the back of the net!

The hosts went close to an equaliser when Joshua Scott’s attempt inside the box was parried away by Max Little and a team mate just managed to arrive in time to clear the ball. Four added minutes were then signalled.

With just seconds remaining Mansfield were awarded a free kick some 40 yards out. Kyle Tomlin stepped up and launched the ball over Max Little to snatch a dramatic equaliser!

The Stags took the lead a few minutes into extra time following Rio Molyneaux’s low cross from the right, which then came off Kayden Harrack and agonisingly into the net.

Arkel Jude-Boyd and Ryan Ingram were each shown a red card after an off the ball incident near the corner flag.

Into the two added minutes and it looked like Trent Mahorn was shown a yellow card? If he was, it was certainly harsh.

In the second period of extra time Matthew Gordon came on to replace Alex Aoraha and also in the 109th minute the Stags went close to adding a fourth goal when Jimmy Knowles hit the side netting.

Mansfield will now take on Burnley at the One Call Stadium in the 4th Round.

I was told that amongst those looking on were Les Ferdinand, Chris Ramsey and Andy Sinton.

It was good to meet up with Rob Cooper, Darren Clark and the R’s fan who I didn’t know in the car park.

Many thanks to Sammy (Dennis Samuels) for the lift.