On 5th May 1948, Queen’s Park Rangers played Slough Centre in a charity match at Chalvey Road.

Prior to the game, an article in the Slough, Eton & Windsor Observer reported that: ‘Next Wednesday will be an outstanding day for sportsmen. We have the first class cricket match – Lancashire v the Home Counties X1 at the Chalvey-road ground and in the evening we shall see the QPR team, which last Monday made certain of the Third Division (South).

The Rangers are to come to the Centre Stadium to play a Slough Centre team, strengthened, if possible by professional and first class amateur players living in the district. Doug Sears, who has been playing for Aldershot, is one who has been approached.

This match is the result of a strong friendship, which has sprung up between the Rangers and the Centre lads, since the Rangers enjoyed the training facilities at the Stadium when preparing for their cup ties.

The Rangers officials have shown their appreciation by promising to bring down practically their full side.

The proceeds are to be devoted to the ‘All Good Causes and Berks & Bucks Benevolent Funds and the kick-off has been fixed for 6.40pm.

After the game the Centre Club are holding a celebration dance and cabaret at the Community Centre and both teams will attend.

There may be one alteration in the usual Rangers team, as efforts are being made by Mr Dave Mangnall, the Rangers’ manager to include Brian Nicholas, the local schoolboy international in his side. I hope this comes off – lots of us want to see this now famous youngster again.

Permission is being sought from the FA to present suitable mementos to the players.’ 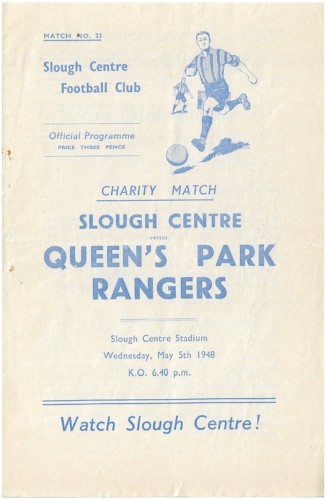 ‘The Centre Stadium was packed on Wednesday evening to welcome to Slough the Queen’s Park Rangers team which had won the Championship of Division 3 (South).

After a goal-less first-half the Rangers went into the lead by means of a well-placed header by Hartburn.

The Centre fought back finely, but there was a suspicion of doubt about the awarding of their equaliser, scored by Day. From this point the game livened up considerably.

The Rangers now exploited their now famous switch and Boxshall, who had moved from outside-right to centre-forward gave his side the lead again. Potter helping the ball in.

Smith (A) made the score 3-1 in the Rangers favour, after fine play on the right-wing and Boxshall scored the best goal of the game after a particularly fine combined movement.

Towards the end a penalty was awarded to the Rangers, but goalkeeper Allen, who came up to take the kick, saw his shot hit the underneath of the crossbar and bounce back to him. He was then penalised for playing the ball twice.

It was also reported after the match (an extract) that: ‘The Mayor of Slough (Ald. J. E. Taylor) presided over the celebration dinner, which the Centre Club held at the Community Centre.

Mr Oswald Quinn, chairman of the Centre Club, welcomed the visitors. The chairman of the QPR FC, who spoke of the Rangers delight in getting out of the Third Division (the “graveyard” of football) – expressed the gratitude of his club for training at the Community Centre.

The Mayor presented souvenirs to those that had played in the match, barometers being handed to the Rangers players and officials, and pewter tankards to the Centre team, while the referee and linemen were given lighters.’

The match programme mentioned that: ‘There is just a possibility that ‘Cheerful’ Charlie Chester and Arthur Haynes, who are both ardent supporters of QPR, will appear in the Cabaret.’

Later that year, on 18th December, a Rangers ‘A’ side defeated Slough Centre 1-0.