‘Amit Bhatia has just been asked to reflect on the 11 years he has spent at QPR. With a hearty laugh, he replies: “The ‘P’ must stand for patience.”

It is a virtue that has certainly been put to the test since joining the board in 2007 after his father-in-law, Lakshmi Mittal, bought a stake in the club. There has rarely been a dull moment since.

He has worked with 15 different managers, seen the club promoted from the Championship twice and relegated back again twice, plus the not-so-small matter of receiving a record fine from the Football League for breaking Financial Fair Play rules.

All the turmoil might lead some to give up and move on, especially as QPR find themselves in a position where, having blown millions of pounds on players and wages in the pursuit of becoming an established Premier League outfit, they are, effectively, back to square one.

Instead, Bhatia is committed as ever. In August, he agreed to replace Tony Fernandes as the club’s chairman.

It seems, where QPR are concerned, Bhatia is in it for the long haul. He told Standard Sport: “Everything being equal, I would like to be involved in this club for the rest of my life. Like any fan, the club that you love can be hugely frustrating, but you love it for a lifetime.”

“I feel enormous frustrations at certain times, like our fans do, but at no point have I desired to walk away.”

“If, in the future, my participation was no longer necessary, or there were better people that can make it more of a success than the current board can, then, of course, we will have to consider it as an option. But it is not an option I would consider or encourage now.” 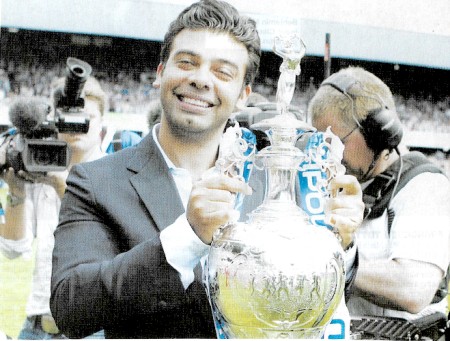 Bhatia was asked to step up to the main role as, unlike previous co-chairmen Fernandes and Reuben Gnanalingam, he is based in the capital. Being close at hand naturally makes for a better working relationship with Chief Executive Lee Hoos and Director of Football Les Ferdinand.

The 39-year-old is the founder and senior partner of Swordfish Investments, whose swanky Mayfair office is the venue for just his second ever sit-down interview.

“I have tended to stay away from doing things like this because I believe much of what I do should be about our actions,” he explained.

“I feel I am more mature now than I was when I first got here. In the first few years, my family told me to just watch and learn from (previous board members) Bernie Ecclestone and Flavio Briatore, because these are seasoned gentlemen that had built great things in their careers.”

“For a young man to share a board with them was invaluable. Hopefully, I will make better decisions than I have before, that other projects I have been involved in will help me to do that. My life away from QPR is busy, but making time is not a problem, it’s a pleasure.”

“The chairman of a club has just a few key decisions to make: manager selection, setting the budget, making sure the balance of the football and non-football side is correct. If you get it right and good people are in place, the club should run itself.”

The big spending days at Loftus Road are over, which is why QPR are so desperate to improve their infrastructure. Non-matchday revenue at Loftus Road for the year is just £100,000, a figure they hope to increase significantly if they get the go-ahead to redevelop Linford Christie Stadium.

Hammersmith & Fulham Council will clearly take some convincing, but Bhatia said: “It’s up to us to showcase how the benefits can come to fruition. It’s our desire to be involved, to make a case, to show that we are good partners to be in bed with, that we are thinking long-term.”

“The process is under way but, like most things, it takes longer than you want it to take. I’m hoping that going forward we can find common ground to progress this.”

At least Rangers are making progress on the pitch. The first four games of Steve McClaren’s reign this term saw four defeats, including a 7-1 reverse at West Brom. They are now just two points behind the play-off places after a remarkable run of form.

“When we had a difficult start, I’m sure Steve felt the pressure,” Bhatia admitted.

“But the board stood by him and would have stood by him regardless. He is a wonderful man, who I admire greatly. Steve is super measured – sometimes I want to shake him and get more excitement out of him – but that’s what makes him so good.”

“He doesn’t panic when things aren’t going well, but he doesn’t get carried away when they are.”

“We said that success this season is making sure we stay up – and that is still the case. QPR have yo-yo’d over the last few years and that is not healthy.”

Given what Bhatia has experienced so far, the next instalment of his QPR love affair will definitely be worth watching.’