On the reverse side of the card it reads: ‘Queen’s Park Rangers became a Southern League Club in 1899, and did fairly well before winning the championship in 1907-8. Have rarely advanced far in the English Cup tournaments.’ 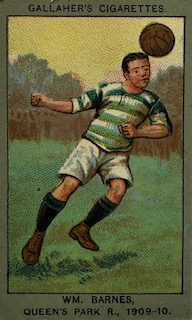 Son of a dockworker, William Edwin Barnes was born in West Ham on 20th May 1879.

His football career began at Thames Ironworks at the age of sixteen. He later played for the likes of Leyton, Sheffield United and West Ham United.

Rangers signed him in 1907 from Luton Town and he made his debut against Tottenham Hotspur at Park Royal on 2nd September.

Taddy & Co. also featured him in their Prominent Footballer series in 1907.