Previously a restaurant, the building situated at 87 Notting Hill Gate, dates back to 1861.

In 1911 it opened as the Electric Palace. Later known as the Embassy Cinema, it was badly damaged during a World War 2 bombing raid. 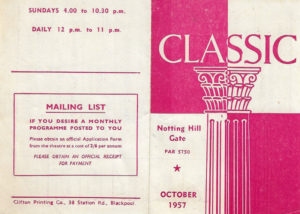 It was renamed as the Classic in 1957 and in October of that year the following films were showing:

Thursday 10th for 3 days was ‘Nana’, in colour, and featured Martine Carol and Charles Boyer. X certificate with English sub-titles.

Sunday 13th for 4 days was: ‘I Am A Camera’ and starred Julie Harris, Laurence Harvey and Shelley Winters. X certificate.

And on Thursday 24th for 3 days was the classic Western, ‘Shane’, in glorious technicolor and starred; Alan Ladd, Jean Arthur, Jack Palance and Van Heflin. A certificate.

Sunday 27th for 4 days: ‘Fernandel The Dressmaker’ was with English subtitles. A certificate.

And lastly for 3 days from the last day of the month: ‘Meet Me In St. Louis’, and starred Judy Garland and Margaret O’Brien. U certificate.

It continued until 1974 and later became the Gate Cinema. Currently it is part of the Picturehouse Cinemas chain.

It is now a Grade 11 listed building.

(The above item is from my collection)