Queen’s Park Rangers co-chairman Tony Fernandes has given an interview to North American-based website Vice Sports in which he talks about the club and the near six years of ownership by him and his Malaysian business partners.

It’s a wide-ranging, if unchallenging, piece where Fernandes talks about lessons learned, his passion for the club and his hopes for the future. For many Rangers fans I know it will prove a confirmation of all the reasons they love the man, the personality, the image.

And of course, that is precisely the point of the article, to appeal to the emotions of QPR fans and the wider world. Cuddly Tony, loves the club, loves the fans, had his pants pulled down, not his fault, best chairman in football… the oft-repeated words trip off the tongue with the ease of a Loftus Road press release.

I must declare an interest at this point. I have long been a Fernandes-sceptic. It started for me in the summer of 2012, when fans without children were evicted from the Lower Loft. There was no consultation, no notice, just a perfunctory footnote at the bottom of the season ticket renewal form. Fernandes’s popularity was at its peak at the time, and my complaints on social media were met with invitations from fellow fans to “eff off and support Chel***” if we didn’t like it.

That issue is now done and dusted of course, and the wisdom of the eviction has been oft debated since (it was in fact a Phil Beard initiative, one of a number of questionable decisions by him). But it led me to view many of the actions of the Fernandes consortium with suspicion and at times despair.

In more recent times my views have mellowed. The owners have written off £240m of debt they accrued. They didn’t have to do that. They’re not getting any of that cash back unless we strike oil underneath the Loftus Road turf. They could’ve have walked away and let the club be vaporised in a cataclysmic instant. I respect them for not letting that happen.

But let’s not sound the horns of triumph too soon. Other tv and commercial income has been frittered in the same way. The thick end of half a billion has been sent down the gurgler in the space of six years. What do we have to show for it? Nothing. A training ground plan still caught up in planning red tape. A grandiose plan for a new town and stadium at Old Oak now seemingly mothballed. The team staring down the barrel of an albeit unlikely relegation to the third tier. To paraphrase Winston Churchill, never has so much been wasted by so few in the achievement of so little.

And yet Tony Fernandes’s personality and charm is put up as the antidote to these brute facts. The article on Vice Sports gets off to a bad start by claiming Fernandes has been the majority shareholder over the last six years, this is untrue, as the latest report and accounts reveals. Clearly this is the fault of the journalist and not his interviewee. 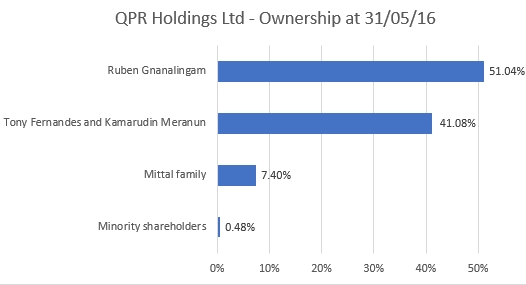 Do we learn anything new from the co-chairman’s words in the article? Well no not really, except his willingness to spin his own legacy and rewrite the history that has gone before. Let’s look at some examples…

“This is the first time, the first period [of my spell at the club] where we can plan. I sat with our chief scout recently and it was the most enjoyable meeting I’ve had, because there was patience, there was a vision, there was: ‘This is what we’re going to be doing.'”

That nearly six years has elapsed without planning is a truly startling admission in its own right, yet rings true given QPR’s haphazard performance over the period. Perhaps if the owners had spent less time chasing the dream and fewer resources on throwing money at success there would have been opportunity to put the club on a firmer footing earlier.

This is very much a statement made with the benefit of hindsight. When the club was signing the likes of Jose Bosingwa, Chris Samba and Julio Cesar – which ultimately left us with a totally divided dressing room, the spirit of togetherness was somewhat absent.

“Today… we have Ryan Manning,… we have Darnell Furlong. These are all academy players.. That’s my dream, right, to have that, and I always said when I came here that I liked to have players who have QPR in their blood.”

I agree with the sentiment, and it’s probably nit-picking to remind him that Manning wasn’t a product of our academy. That aside, see my previous response… I don’t think Fernandes was pondering Michael Petrasso’s future when lording it up at the global live press conference announcing the signing of Ji Sung Park.

“It was something I just thought was natural – you pay someone and you think they are going to work their guts out, but that wasn’t the case.”

I’m going to give Fernandes the benefit of the doubt on this one. He and his board colleagues are guilty of an aching, almost childlike naivety in the world of football. They put their trust in the wrong people, the wrong first CEO appointment, a succession of managers and agents. Our owners played the ‘glory game’ while pundits and rival fans alike laughed at the project and developed a dislike, if not hatred, for the insolence of our ambition.

The lessons may or may not have been learnt but the damage is done. Fernandes recounts his experience at the Wembley playoff final against Derby with great passion.

They cynic in me has always thought that is was easy for Fernandes to be passionate about that day – when the owners trousered £130m of tv money on the back of one football game and another crack at the highest profile league in the world.

I realise I am being harsh though. Even in my own ambivalence towards Fernandes I can see that it would be hard for someone in his position to falsify the passion he demonstrates towards the club. I used to suspect that the owner had some secret nefarious purpose for owning QPR. I now see I was wrong. We have collectively arrived where we are through misadventure, incompetence, naivety and the good old British (or should it be Malaysian?) cock-up.

And things are better at the club in the last couple of years. Incumbent CEO Lee Hoos has brought a welcome professionalism to the helm and much improved openness and communication. Along with Director of Football Les Ferdinand he has worked to bring financial stability and prudence to affairs. We can only hope the current travails on the pitch can be resolved without sacking one or more managers during a season.

I wish we could turn the clock back. Had we done things differently, we might have some chance of real concrete progress towards infrastructure at the club, or maybe even preserving our Premier League status, in return for the millions that have evaporated.

In the final analysis I think Fernandes deep down knows he has presided over a calamity, and like any human being wants to save face for him and his colleagues. It is to their credit they haven’t run, but nonetheless cannot honestly sidestep blame, as much as they would like to rewrite history.

The ultimate crying shame for our beloved football club is that the last six years represents the mother of all opportunities wasted.