This was the start of the final run-in of the 1967/68 Division 2 campaign. What a nail biter! With Ipswich, QPR and Blackpool all battling it out for the two promotion places to the top flight with just three fixtures to go.

The game at Portman Road was not surprisingly an all-ticket 28,000 sell out.

I had travelled up on a packed train with Alan Poole and Colin Woodley and we took our places with 2/300 other R’s fans in the corner of the home end.

There were over 5,000 R’s supporters, split over three sides of the ground. The majority of Rangers fans were situated behind the other goal and also on the halfway line, in the paddock area.

The kick-off commenced in a frenzied atmosphere. Rangers took the lead with a Rodney Marsh penalty and were winning 1-0 at halftime. So far, so good.

Alas despondency took hold in the early stages of the second-half as the prolific goal scorers, Crawford and O’Rourke, put Ipswich 2-1 ahead and the match was slipping away from us!

Then, with five minutes to go, a cross from Les Allen found the head of Mick Leach and we equalised, 2-2! Cue bedlam amongst the QPR contingent and tears of joy from a certain individual who shall remain nameless!

At the final whistle the precious point was ours. Never before had a draw proved so vital.

I heard later that after the game Graham Temple had had his QPR flag destroyed by disgruntled Ipswich fans!

Promotion was subsequently obtained as runners-up to Ipswich. 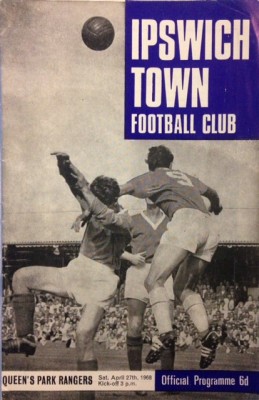 John Gander travelled up to Ipswich to file this report for his local newspaper, ‘The Post’:

‘In a game fraught with nervous tension, anger, and incredible excitement, Queen’s Park Rangers fought off their highly skilled opponents with everything they had.

After the butterflies were knocked out of their stomachs, both teams went at each other like two lions, neither conceding the other an inch.

Ipswich displayed great skill with the ball and on the whole played masterful football but their few mistakes were grave ones.

Marking QPR idol Rodney Marsh was one of them. Derek Jefferson badly miscalculated when his defensive attack scythed Marsh’s feet from under him. It was like hitting a land mine.

Taking the ensuing spot-kick like a lit fuse, Marsh zigzagged towards the ball and exploded it into the net. The roar from the Rangers supporters drove correspondents to the floor to phone the news through.

Hackles were up after this and the tackles became harder. Centre-half Bobby Keetch was booked.

Ipswich equalised in the 37th minute when O’Rourke put it away after Frank Brogan brought the ball down the wing at his incredible speed, whipping by everything in sight. They maintained the pressure, making Rangers play bulk football.

When the ball went downfield they chased after it like tribal horsemen; then an Ipswich defender would shoot it back over their heads like a cannon ball and they would fall back and form something like a “Waterloo Square” in front of their goal. Wellington would have been proud of them.

Marsh got things under control again when he put a pass from Keen easily into the net, but the on-the-spot referee ruled he had handled it.

Five minutes later Crawford scored Ipswich’s finest goal when he headed in a centre from Houghton. With Rangers in disarray it looked all finished bar the shouting.

Rising above a flurry of heads, Leach pushed it into the net. The time? Ten seconds to go. First Division – here they come!’ 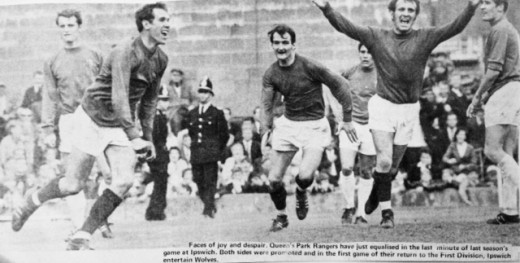 We had beaten Huddersfield Town 3-0 the week before and the programme notes devoted a whole page to the next encounter with top-of-the- table Ipswich.

‘We Need You With Us At Ipswich’ it proclaimed. ‘We have been informed that this match will be all-ticket, with a police maximum of 28,000.

The allocation will be two tickets per person on Supporters Club card. We regret that all stand seats for the match are completely sold out.’

Coach and train details followed, and for those travelling by car, there was a suggested route with a map.

‘The Supporters Club are laying on the largest fleet of coaches ever for this match. Bookings are being accepted at Supporters’ Club kiosks all over the ground today. Seat prices are 12s each (boys 6s). The coaches leave Shepherd’s Bush at 9am and arrive back late Saturday evening.’

As for those travelling up by train: ’The train service to and from Ipswich is very frequent and trains leave Liverpool Street at 8.30am, 9.30am, 10.30am and subsequent hourly intervals throughout the day.

I went by coach, but can’t remember anything about the journey or who I had travelled with?

Word went round in Ipswich that R’s fans had taken over some of the local pubs and in some cases were even serving the pints!

Officially there were 5,000 QPR fans on the terraces (plus those sitting in the stand), but many more had climbed over the turnstiles.

I stood behind one of the goals and that end was packed with Rangers fans. I can still see in my minds eye Mick Leach rising and heading the ball in the back of the net in the last minute of the game! Wild scenes then followed!

We went on to beat Birmingham City 2-0 at Loftus Road the following week and the stage was then set for the final, decisive game at Villa Park on 11th May!