The following wide-ranging interview with Les Ferdinand was conducted by Steve Stammers and appeared in the Mirror recently:

Les Ferdinand pauses, takes a sip of coffee and then offers the name of the Queen’s Park Rangers player who has proved to be irreplaceable.

“Richard Langley,” said the man whose task now is to re-shape Rangers back into the kind of club where he made his name – along with the likes of Gerry Francis, Dave Clement, Ian Gillard and the Allen brothers Bradley and Clive. Richard Langley?

“I will tell you why he is important,” said Ferdinand, now the Director of Football Operations at Loftus Road.

“He was the last player to be a first-team regular who came through the youth system at Rangers,” said Ferdinand who himself made his name at QPR after starting his career at non-league Southall and then Hayes. “The last player – and that was 16 years ago. That cannot be right.”

Langley, now 35 and last seen playing for Staines Town, will hardly go down in the Hall of Fame at Shepherd’s Bush. He had a decent enough career at Loftus Road playing 166 games and scoring 21 goals from midfield. He also played 17 times for Jamaica. But to Ferdinand, he is a hugely important figure.

“What Rangers used to be able to offer was a chance to young players – the opportunity to play first-team football much sooner than maybe at the likes of Arsenal, Tottenham and Chelsea.”

“It was a big selling point for the club. But that isn’t the case any more and I want to bring that thinking back into the club. This was my first professional club and I played for England when I was here.” 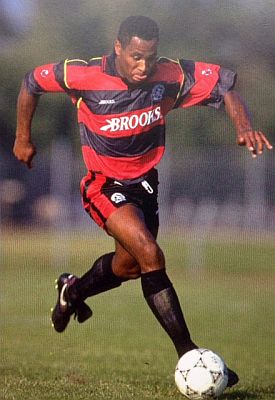 “And you look at players like the late Alan McDonald, Andy Impey and Wayne Fereday who came through the youth system. We have to get back to that.” In more recent years, the club’s philosophy had changed.

“It has gone full circle now,” said Ferdinand. “It’s a club that pays loads out in wages. QPR was an attraction for players coming to the end of their careers, and they got one more payday. That is not the players’ fault but that was what was allowed to happen.”

Ferdinand was originally brought in as Head of Football Operations last October by owner Tony Fernandes – a fan of Ferdinand from the days when ‘Sir Les’ was the star turn at Loftus Road and Fernandes, as a student, lived on the Uxbridge Road.

He wanted to see the man he idolised brought back, and had seen Ferdinand running a hugely successful development squad with Tim Sherwood at Tottenham until last summer.

Ferdinand made it clear that he did not want to usurp the authority of manager Harry Redknapp. “I wasn’t coming in ahead of him, I was coming to work with him.” But the start of the pair’s working relationship was not the best.

“(Redknapp) came out publicly and said it was a stupid title,” Ferdinand said. He immediately went to see the manager. “I asked if he had a problem with me and he insisted he didn’t. He just thought it was a stupid title. I said there was no reason to say it was stupid. Thinking back, I think it was him just flexing his muscles. Saying ‘I am in charge’.”

Ferdinand’s brief clearly encompasses more than the first team. “I am at the training ground in Harlington every day, I meet with the scouts, I speak with agents and watch DVD clips of players recommended to us. And, of course, I attend all our games – home and away.”

There was a recent home game, however, Ferdinand may now wish he had missed. And there was an incident which belied his laidback image. He was less than impressed with the performance of referee Craig Pawson in the 2-1 home defeat by Tottenham and let the official know in no uncertain terms what he thought. That has just cost him ¬£12,000 in a fine from the FA.

That defeat added to the problems for a team with a wage bill that Ferdinand described as “astonishing”.

“You know, a few years back, I went on an LMA course in Warwick and one of the aspects was finance. Wage bills were equated to a club’s league position. It was uncanny how accurate it was – the more they spent, the higher they were in the table. But where QPR are in the league, and what we are paying, are nowhere near each other.”

Redknapp left at the end of January. “Let’s get it right, the club did not get rid of Harry,” Ferdinand said. “He decided himself that it was time to go.”

That left Rangers with a problem. “The window was shut. No players could come in. Should we go for experience? We had one of the most experienced managers in the league and look at the position we’re in.”

“Tim Sherwood – a good friend of mine – was of course discussed but Aston Villa got there first.” It was decided Chris Ramsey would work with the players.

Ferdinand said: “The feedback the owners got was good so he is in charge until the end of the season.” But can Rangers survive? “Yes,” said Ferdinand, with no hesitation.

“I was in this same position at the club back in 1991. We looked doomed. Don Howe was the manager and our first choice strikers – Colin Clarke, Roy Wegerle and Mark Falco – were injured. Me and Bradley Allen were the strikers and we won 2-1 at Luton. ”

“That started a run and we stayed up. It gave us belief – and we need that belief among the players here now. We can do it, I am convinced.”