If not now for Queen’s Park Rangers, then when? This ought to have been the perfect opportunity for Rangers to turn their season around, to spark their push for Premier League survival, even now in late March, with just eight games left after the international break.

Rangers welcomed an Everton side who were humiliated in Kiev on Thursday night, who had won just two of their previous league games, whose confidence is on the floor and who cannot defend. Given that Rangers are only capable of winning at Loftus Road, this had to be it.

And yet QPR lost again, their ninth in 10 games and their 20th defeat of this Premier League season, which at this rate is likely to be their last at this level for a while. Rangers did not play terribly, and they fought back admirably in the second half to pull the score back to 1-1.

But, at this time of year, with this much on the line, the performance is irrelevant compared to the result. Rangers were sliced open twice by Everton, once in each half, and that was that.

It is rather difficult to see how they can get out of this from here. Of their eight remaining games – from which Ramsey has targeted four wins – five are away, and the next two visitors here are Chelsea and West Ham. When Newcastle come here on 16 May, Rangers’ season may well be over.

There are many reasons why Rangers are heading back into the Championship, starting from the very top of the club, but what it ultimately boils down to, almost every Saturday afternoon, is a lack of quality on the pitch. 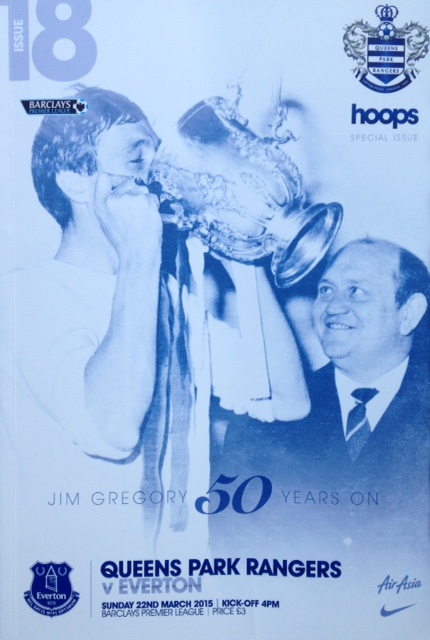 Their only approach in the first half was to play the ball long to Bobby Zamora – Ramsey must have seen how vulnerable Everton were to direct football against Dynamo Kiev – but they could not find the incision to make it count.

Zamora relished the physical battle with John Stones and Phil Jagielka but that in itself was not enough, and when, at 1-0 down, Rangers created their only chance of the first half – a Zamora header from an Austin cross – he could not get enough power on it.

Ramsey threw on Eduardo Vargas early in the second half and, as QPR’s quickest and sharpest forward, he did make a difference. Five minutes after coming on, Vargas hammered Austin’s lay-off into the net after Everton had failed to clear a corner.

But back in the game at 1-1, Rangers could never build on that platform. Austin and Zamora both shot over from the edge of the box and it took another wildcard substitution – Adel Taarabt for the last nine minutes – to inject any imagination. He curled one shot just wide and then hit the bar in the final minute, but by then it was too late.

“I think they played well today, and showed everybody that they have plenty of fight left,” said Ramsey, in an honest post-match appraisal of QPR’s problems.

“Everybody did their shift and played their best. We can’t keep being unlucky at this stage of the season. We should have maximised that performance, with one point or possibly three.”

While Rangers’ saw their survival chances further diminished here, Everton should finally be able to free themselves from fear of the drop. These three points moved them up to 13th and they can at least look at the teams above them over their eight matches.

Roberto Martinez, never short of enthusiasm, described it as “probably the most satisfying win” since he arrived at Everton. It was not a classic Martinez display, but that was precisely the point.

“We had to cope with QPR’s goalscoring threat,” he said, “which takes a lot of character and guts. It was not a day for a technical performance on the ball, but for a really strong group of players, with a strong will to get a win. So the satisfaction is immense.”

Everton had to dig in at first but they did that and when they had the ball they had just enough quality to beat QPR. The first goal, after 18 minutes, was delightfully well worked.

The on-loan Aaron Lennon threaded a perfect pass through to Arouna Kone, who crossed back to Lennon. He laid the ball off to Leon Osman who squared to Seamus Coleman, whose shot went in off the inside of the far post.

From that point Everton sat back and waited for their next chance. They conceded an equaliser, of course, but with 12 minutes left they cut through QPR again and won the game. Darron Gibson played the ball out to Coleman on the right, whose low cross found Kone, and Lennon followed the ball in and beat Rob Green.

Martinez was thrilled with Lennon’s contribution, describing it his “best performance by far for Everton”. He said it was too early to consider making his transfer permanent, but with Premier League safety assured, Everton can at least start thinking about these questions. Queen’s Park Rangers must start preparing for a very different summer.

Well, the players were up for it, but once again, little luck, as you would expect from a struggling side. The visitors hit the post and the ball went in whereas Junior Hoilett’s curler beat the keeper but rebounded out.

Eduardo Vargas looked sharp whilst his fellow countryman Mauricio Isla made one of the tackles of the season. Zamora really should have come off much earlier.

At 1-1 and even when 2-1 down, there was hope that we could get something out of the game. Adel Taarabt’s shot agonisingly hit the crossbar in the closing stages.

Ale Faurlin was interviewed at half-time and away from the pitch, members of Jim Gregory’s family were guests of the club.