He was born in Woodford in Essex on 13th December 1955 and began his football career at Arsenal, but it was while he was at Leyton Orient that he made his league debut.

Rangers paid £250,000 for his services in August 1978 and Glenn made his debut for the R’s at Loftus Road later that month on the 26th against Nottingham Forest.

He eventually became captain and proudly led out the team at Wembley in the 1982 FA Cup final. Unfortunately, Glenn wasn’t involved in the replay five days later as he had to start his two-match ban after being sent off at Luton earlier in the month.

Glenn went on to make 181 league and cup appearances for the R’s, scoring 18 goals, before being transferred to Newcastle United in December 1983 for a fee of £150,000.

He made six appearances for the England B team and Glenn later played for Watford and Leyton Orient before taking on the role as player-manager at Gillingham in 1992;

Glenn resigned the following year to take over at Watford and later served Burnley as Chris Waddle’s assistant.

Between 2001 and 2009 he worked under Glenn Hoddle as a coach for the England team and later managed the likes of West Ham, Newcastle and Norwich City. 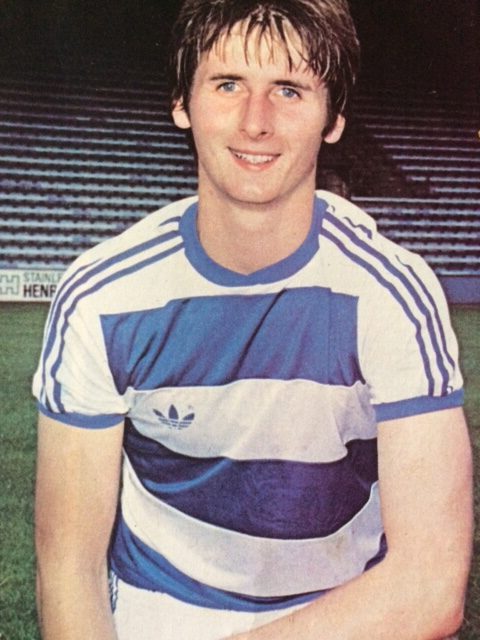 ‘It must be admitted that ever since I went to train with – almost said the late Leyton Orient, I felt that Glenn Roeder was a player of quality who should join the Rangers.

Imagine my delight when that actually happened just over a year ago, and also the feeling of disappointment when he was not selected for the first team. And now delight again when Tommy Docherty immediately made him team captain.

As club captain, Glenn admits to being ‘a tails’ man: “I always call tails. The only really wrong thing I did was at Sunderland when I won the toss and asked us all to change round.”

“Within 15 minutes we were three goals down. But then the team were fantastic. If you were three down away from home in front of 25,000 people things can go very wrong.”

“Frankly, it could have been a Burnley result. But our lads fought back and, in fact, by the end we might have scored one and perhaps two. I’m not excusing the defeat, but the attitude was fantastic.”

Clive Allen is, of course, our leading goalscorer and what a wonderfully talented young player he is, along with his partner Paul Goddard. Yet it is Glenn Roeder, originally a back-four man who has scored eight goals already this season.

Glenn has mixed feelings about this: “Firstly I want to get into double figures, but at heart I’m really in the back-four.”

“The Boss has asked me to do a job and I’m doing it. I’m delighted the goals are going in, but I get as much pleasure out of knowing goals against us aren’t going in. It’s a very odd situation to be in.”

“It’s funny really but Clive Allen couldn’t care less about the defence and defending. His job is upfront and to score! Yet when we were seven up against Burnley the back-four would have felt really angry if they had scored one.”

“At Bristol I played in the midfield and then I was brought back to the back-four for the rest of the match and it was really hard to adjust. At Wolves in the second-half I was pushed right up the middle as a centre-forward.”

“You know how hard it is to get the ball with your back to a player. I think in fact it’s good for you because you know how other players feel.”

“I like coming forward, but from the back-four. Against Burnley I set up one of the goals by coming forward and beating Leighton James before pushing the ball wide. Coming from the back you often find that forwards are lazy in covering you and you can go forward almost unmarked.”

It was such a majestic move when Glenn swept forward at Stamford Bridge that put Chelsea out of the FA Cup two years ago. I have always felt he was better going forward than being anchored at the back.

Like Trevor Brooking, he has this deceptive sleight of speed: outwardly looking rather slow but in fact proving on the field exceedingly fast.

Ask him which goal this season brought him most joy and he readily admits: “The one against Watford. I picked the ball up in midfield and was on the end of the move to push it home.”

Looking back at the start of last season he admits that he felt “a little bit depressed”. Then he burst into agitated optimism: “But then I didn’t let it get me down. I’m a natural optimist. I knew there was nothing wrong with me. I’ve always had this great personal thing. I felt down at the time, but then I always think things will come right.”

And Johnny Hollins and Theo Foley were great to me, and kept my own belief in myself, and here I am.” What a great lesson to us all. Glenn has always struck me as a wonderful, straight-forward character.

As he now admits: “This time last year I could have been sold away for £50,000, and Rangers could have done their money.”

The wheel of fortune turned full circle when Tommy Docherty asked him to be club captain, following Rangers’ games in Nigeria and Denmark last summer. I well remember the Doc telling me that Nigeria proved to him who had character in the team.

It was such a dreadful tour. If you could survive that and come up smiling, then you could surely last a British winter in the Second Division. So, it is with Glenn, who now owns his own house nearby his parents in Hornchurch.

“I could never leave that area, all my friends are there. In fact, I only really use the house at weekends, because I like to be with my parents, and I’m single, so you get a bit lonely.” Mind you after this has appeared in the programme, I’m not so sure!

As a hobby he owns a couple of greyhounds yet adds: “I’m not like Don Shanks really. I don’t do it for the betting. I love the dogs. My father always took me there and I go two or three times a week. But I only have £5 or £7 on if I have a bet.”

Alan Barnes told me about the time when he was trying to get back to West London after a long-distance midweek reserve game. He managed to get a lift on the team coach and when they stopped off it was Glenn who came over and offered Alan a drink.

Don Hutchison said of him: “I’ll never forget when my dad was passing away, the gaffa told me to get in my car to Newcastle and go see him quick. Glenn was on the phone with me for all five hours of my journey! Sleep well gaffa. My thoughts are with his family.”

Glenn was a stylish, ‘cultured’ defender and we will always remember his ‘Shuffle’ as he advanced upfield.

There was a minute’s applause prior to kick-off against Barnsley.