The Supporters Club organised rail travel for the Division One league match at Old Trafford on 12th October 1985. Departure from Euston was at 10.32am and arrival atWarwick Road Station was scheduled for 13.55pm.

Pictured below is my mate Ray Meaney, Ian Randall, his brother Lee, and also Sean, Shay and Danny Conway, plus Phillip Hale. 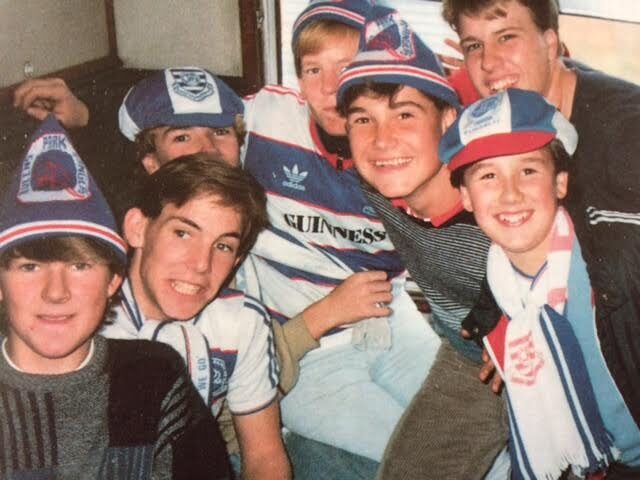 The R’s lost 0-2 to the league leaders in front of an attendance of 48,865. David Keenan of the Sunday Telegraph wrote the following report:

‘The effectiveness of wingers in modern football – a problem which Bobby Robson, England’s manager, will grapple with on the road to Mexico – was never better emphasised than in this fast, open game at Old Trafford.

It is rare sight to see four wingers in a First Division match, but Olsen, Barnes, Fereday and Fillery provided the standard of skill and entertainment which if repeated throughout the league, will surely bring the crowds back into football.

Rangers had coped admirably at the back through powerful headed clearances from Wicks and Fenwick, their captain, but whenever Stapleton wandered wide the gaps appeared.

The Republic of Ireland striker, having provided the cross which Robson headed wide in the 28th minute, appeared on the opposite flank three minutes later to set up Hughes’ ninth goal of the season, a close range shot of such ferocity that the ball was in the roof of the net before Barron, the Rangers goalkeeper, could move.

However, it was to be Olsen who had the final say. The Dane slipped between two Rangers defenders to collect a pass from Hughes in the 52nd minute and with typical impudence struck a delicate shot with the outside of his foot which eluded Barron.’