La Gantoise visited Loftus Road on Thursday, 10th May 1951. The Belgian side had expressed their interest the previous year in being part of the ‘All Nations Sports & Cultural Association’.

The Association was six years old and at that time more than 25,000 Sportswomen and Sportsmen of England and the Netherlands had exchanged visits and the hope was that it would be extended to other countries.

The match programme also reported that the Borough of Hammersmith and the city of Ghent had formed a link-up. A match report appeared in the West London Observer the next day:

‘A 4-4 draw was a fair reflection of the match between Queen’s Park Rangers and La Gantoise at Loftus Road yesterday (Thursday) evening.

Watched by nearly 5,000 people – including the Mayor of Hammersmith (Ald. F. L. Hewett, JP) and the Ald. of Sportsfor Ghent (Ald. H. Verhaest) – the game was a ding-dong struggle with neither team gaining supremacy over the other.

A feature of the match was the recovery of La Gantoise by scoring three goals in eight minutes after Rangers had obtained a clear lead of three goas in the previous 40 minutes.

QPR opened the offensive in the first few minutes of the game when centre-half Woodward attacked the La Gantoise goal. For the next 30 minutes the ball was rarely out of the visitors’ half.

The Belgians’ defence was weak in the first-half, and it was only after Rangers had scored their first three goals that La Gantoise ceased being on the defensive and put in some fine shots. 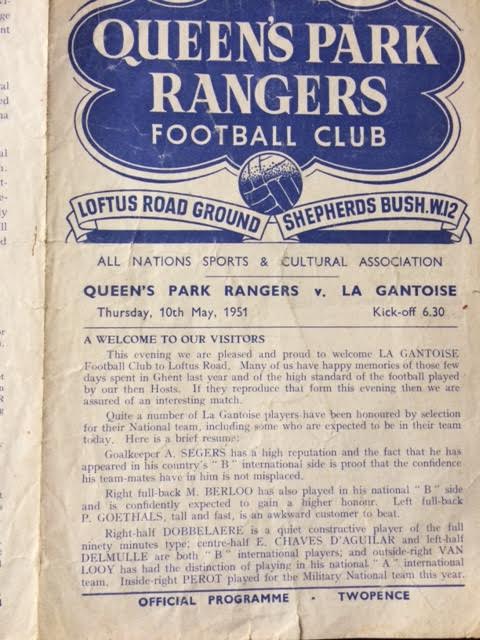 Smith opened the scoring for Rangers five minutes after the kick-off from a good pass by Hatton. Ten minutes later, the second was obtained by outside-left Shepherd from a pass by Smith.

Conway Smith was also instrumental in the scoring of the third when he brought the ball down the field for Clayton to wham it past ‘keeper A.Segers.

F. Chaves reduced the arrears of La Gantoise when he made a beautiful run down the centre of the field, through a crowd of Rangers’ defenders, to put the ball past goalie Stan Gullan.

Inside-right Vandercrysen obtained the second from a pass by F. Chaves 18 minutes later, and within seconds Vandercrysenscored the third.

Clayton put Rangers back into the lead just after the start of the second-half when Hatton scored from a penalty. La Gantoise equalised six minutes later through F. Chaves.

With the Civic Dignitaries present, were the Town Clerk of Hammersmith (Mr H. Slim) and Mr M. Cammaerts, Attacheto the Belgian Embassy, representing the Belgian Ambassador.’

Three days earlier, Dutch side SVV Schiedam had been the visitors to Loftus Road.

(Thanks to Colin Woodley for unearthing the match report)