QPR have taken on Hibernian on three occasions. Firstly, at Loftus Road on 15th February 1964 when the R’s recorded a 5-1 victory.

The third encounter was also in the Scottish capital and it took place on 12th August 1995. Alex Miller, the Hibs manager, wrote the following in the match programme:

‘Queen’s Park Rangers are one of the most attractive sides in the English Premiership and I was delighted when they agreed to travel north.

Ray Wilkins has done a fine job at the club since he took over as player-manager, midway through last season. Under his guidance, they are playing football the way that I think football should be played.

Like Hibs, QPR play the passing game, so there is every prospect of an entertaining encounter this afternoon.’ 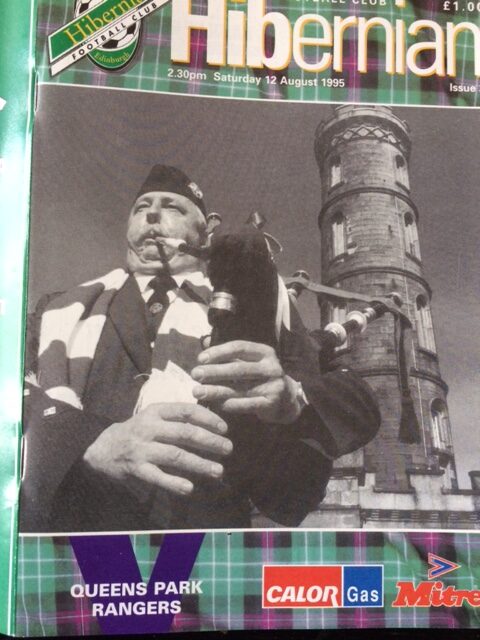 ‘Hibs fielded a shadow side, but still headed for the new season with a victory.

Jim Leighton and Darren Jackson were on Scotland duty, while Keith Wright, Graham Mitchell, Michael O’Neill and Kevin McAllister watched from the stand.

But two goals from Pat McGinlay overcame Ray Wilkins’ side and hinted at real depth in Alex Miller’s squad for the new term.

There were good performances from Leighton’s deputy, Chris Reid, Andy Millen patrolled the midfield with authority and Kevin Harper was sharp up front. But this was a long way from the competitive action that lies ahead, even though there were four cautions as tempers frayed.

Hibs should have taken the lead in 20 seconds when Harper picked out Chris Jackson at the far post with a cross from the right. However, the youngster screwed his shot high over.

Yet it was Rangers who stole the lead when Danny Dichio controlled a cross from the right by Kevin Gallen and the big striker slid the ball past Reid from 10 yards.

After the interval, McGinlay attacked a Mickey Weir corner from the right at the near post, and his header flew high into the net past former Motherwell ‘keeper Sieb Dykstra.

Reid did well to keep Hibs on level terms when he moved smartly off his line to block Gallen’s shot after the striker had broken free.

With a draw looming, Pat McGinlay took a short freekick from Weir and his shot was powerful enough to beat the entire Rangers side spread across the goal-line.

The cautioned men were Hibs’ Willie Miller along with Rangers’ Dichio, McDermott and Holloway.’

Then a week later the R’s lost their opening Premier League game of the season, 0-1 at Blackburn.