Rangers started their 1976/77 League Cup campaign with a 3-1 away win at Cardiff and followed this up with a 2-1 home win against Bury in Round 3.

The R’s then went on to beat West Ham United 2-0 at Upton Park. Next up was the 2-1 victory against Arsenal at Loftus Road in the quarter-final.

QPR were then drawn against Aston Villa in the semi-final. The 1st leg was played at Loftus Road and finished goalless. The R’s then travelled to Villa Park on 16th February for the 2nd leg.

The Supporters Club chartered two trains to Whitton Station and numerous coaches made the journey up the motorway. 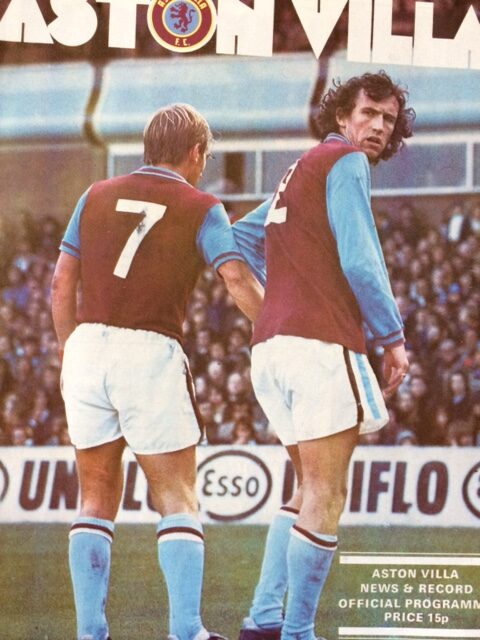 Frank Clough wrote the following match report: ‘This was an epic that pinned fans to their seats for every second of two hours of incredible football…and it all goes on again next Tuesday at Highbury.

In one of the finest matches it has been my privilege to see, just about everything happened, but that second dressing room for next month’s League Cup Final still has no name on it.

Villa must have been convinced that they had earned the right to meet Everton at Wembley when their powerhouse football swept them in front in the 64th minute.

For 20 minutes, Rangers were pinned in the corner taking merciless punishment, but the men from the Midlands failed to add the killer touch and suddenly Rangers were level.

Into extra time and Villa went in front again. Then Rangers missed a penalty, but within 90 seconds they had come back once again to equalise.

And as the final whistle went, 22 totally exhausted players embraced each other for the part they played in one of the most titanic football struggles in years.

Heroes were numerous. There was John Deehan who scored both Villa’s goals. Only three years ago he was one of the wide-eyed kids on the terraces – last night he was the toast of the town. He scored the first after that tireless little performer Brian Little had speared Rangers’ defence with a devasting through ball.

Andy Gray, teeth gritted against the pain of a groin injury, turned and appeared to lose possession, but John Deehan pounced and took it past Phil Parkes and slotted it in.

His second, seven minutes into extra time was an unmarked header from Gidman’s free kick.

Then there was Gerry Francis, Rangers’ England captain whose career looked destined for the dustbin after being out for seven months with a serious back injury. He headed Rangers’ first goal in the 79th minute, the goal that dragged them back into the action.

Villa must have raged at the injustice of it for they could have been four up by that time – but perhaps it was fitting punishment that the goal should come from a free kick conceded by Alex Cropley for an evil-looking tackle on the veteran Frank McLintock.

And finally, there was Peter Eastoe, dragged off the subs’ bench as soon as Villa went 2-1 up, and scoring a fairy-tale goal 17 minutes later with a sweeping shot from a cross by Dave Thomas.

No Rangers player danced with greater delight than Don Givens, for only 90 seconds earlier he had seen Villa goalkeeper John Burridge pull off a sensational save from his penalty after Francis had been chopped down by Leighton Phillips.

At the death, Rangers’ keeper Phil Parkes needed every inch of his huge frame to fingertip away a certain goal by Andy Gray.

It was almost a relief when the final whistle went – I doubt whether anyone could have taken much more of it!’

Brian Moore (ITV’s ‘On the Ball’) later described it as: “The outstanding cup-tie of the season.”

I remember a large Rangers turnout and lots of trouble outside the ground and around Whitton Station.

QPR’s League Cup journey ended the following week at Highbury with a 0-3 defeat at the hands of Brian Little!