Germany invaded Poland on Friday 1st September 1939 and after Britain had declared war two days later the FAabandoned the football season and the results were expunged from the records.

However, on 21st October, QPR took on Reading in their first game in the newly-formed League Division South ‘B’.

‘Queen’s Park Rangers, now the leaders of the South ‘B’ Section of the Regional League showed Brentford how to adapt themselves to conditions at Griffin Park on Saturday.

In the last 25 minutes they scored seven goals, this inflicting Brentford’s first defeat at Griffin Park in this competition and one of the heaviest – if not the heaviest in the club’s history. Credit, however, is due to the Rangers for the magnificent display under unusual conditions.

Brentford were entirely at fault in not changing their style of play when it was obvious that the clever combined football, which they had been displaying in recent games, was not suitable on Saturday.

The Rangers on the other hand always kept the ball in front and with speedy forward movements had the Brentford defence at sea. 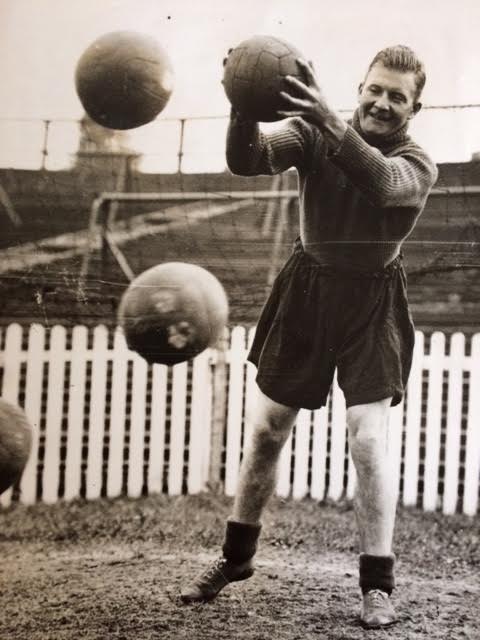 In the first half, play was fairly even. There were thrills in both goalmouths and just before the interval, Mallett, the Rangers inside-right, lost a brilliant chance of putting his sideahead when Gaskell dropped the ball. With an open goal staring at him, Mallett flicked the ball to the wrong side of the post.

Earlier in this half, Brentford were unfortunate in not opening their account for Townsend crashed the ball against the goalkeeper’s legs and in a scrimmage that followed, Hopkins shot through, but a defender kicked off the line.

In the second half, Queen’s Park Rangers were well on top and it was in accordance with the run of the play that they lead 25 minutes from the end. However, it came as a surprise when goals commenced to come quickly, Brentford’s defence failing to check fast, moving attacks.

All the Rangers goals except one, were the result of smart forward moves, Mangnall led the run with dash and gave James a busy afternoon. He received excellent support from Mallett and McCarthy, the former with his intricate dribbling.

Mallett gave Rangers the lead with a first-time drive, following a cross from the left. Nearly every raid after this saw the Rangers adding further goals, and the second came through McCarthy with a header.

McEwan obtained the third following a good forward move. Bonass registered the Rangers’ fourth, and the next came through Mangnall, after Gaskell had made a good save from McEwan.

Gorman, the Brentford back, gave the visitors their sixth, when he turned a shot from McEwan into the net.

The last goal came just before the end and was scored by Mangnall. Brentford appealed strongly against the goal, alleging that Mangnall had handled the ball.

This 7-0 victory by the Rangers means that they have registered no fewer than twenty goals in their last three games – 8-3 at Fulham and 5-2 at home to Portsmouth.’

The R’s then went on to beat Reading 3-0 at Loftus Road on New Years Day.

(Thanks to Colin Woodley for sending me the match report. The Press photo of Bill Mason is from my collection)