‘Reading the Gazette which was sent to me by a friend, I was interested about Askew Road as a shopping centre. I lived in St. Elmo Road – Askew Road end – for 60 years.

I remember the fish shop on the corner, also when it was a butcher’s shop belonging to Mr Nines. They used to slaughter the animals behind the shop which is now used for cutting and gutting fish. We used to be able to buy pig’s fry at 4d a pound, also a leg of beef at 4d a pound.

I lived in Becklow Road at the time my mother had a laundrybusiness. The shops in Askew Road, which was then Starch Green Road, used to keep open till midnight on Saturdays as well as late some nights in the week.

Mr and Mrs Hall, who had a wet fish shop opposite ‘The Swan’, were very good to the poor of the neighbourhood. Children used to go for a penny bloater for father’s tea and always came away with two or three.

The Hall’s fried fish was the best in the neighbourhood at that time, being cooked in pure beef dripping. I know because my mother used to supply the dripping, which she bought from the cooks working for the ladies where my mother did the laundry.

I also remember the Askew Road Tradesman’s Cricket Club, which played on a nearby club ground, which is now built up – the flats in Old Oak Road. My father belonged to the club and as children we spent many happy hours there.

When we moved to St. Elmo Road it was Rankin Street, named after the man who built the houses, and round the corner was Wilton Road West, now also known as St. Elmo.

There used to be a lamp standard in the centre of the road at the top of Rankin Street where the Salvation Army used to play on Sundays and have carols at Christmas time. 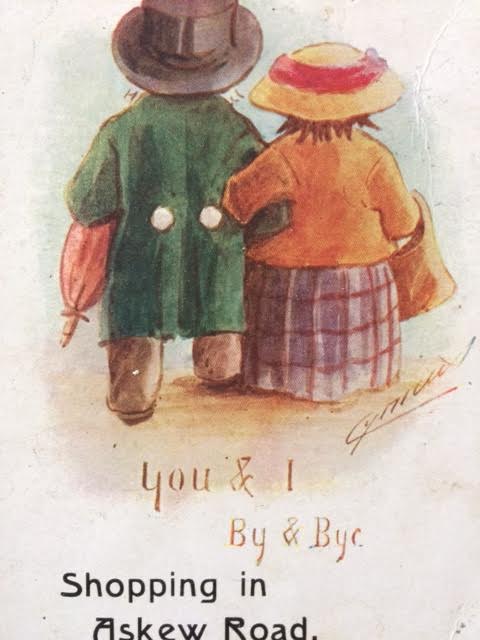 We used to get lovely ladies’ hats at Mr Chambers’ shop – now Greggs. One used to buy wet fish and shell fish, and the stewed eel and pie shop was greatly missed when it closed.

Askew Road was indeed a good shopping centre in my young days. I had two sisters and five brothers who all went to Victoria Road School, as did their children. The older childrenpaid tuppence a week school money at first.

I also remember St. Saviour’s Church being built. We each paid a shilling to buy a brick. The soup kitchen at St. Saviour’s was opened twice a week and my husband’s mother used to make the soup in a large copper urn.

It was sold at halfpenny a quart and what good things went into that soup – leg of beef, sheep’s heads, neck of mutton with onions, carrots, swede, turnip and celery.

I was born at 119, Starch Green Road in a house on the opposite corner to Victoria Hall, which is now occupied by flats.’