The Hammersmith Palace, Temple or Theatre of Varieties in King Street, was another example of a Music Hall evolving from a public house.

According to ‘The Stage’ weekly newspaper, in 1884 Acton Phillips purchased the Town Hall Tavern, the Theatre of Varieties, which stood behind it, and also some of the adjacent land, which then evolved into the Palace of Varieties.

It became a stronghold of variety and most of the top Music Hall stars appeared there. When she was pretty much unknown, Marie Lloyd made an appearance and Acton Phillips is said to have written in his personal copy of the programme, that she was: ‚Äúvery good – cheap‚Äù. 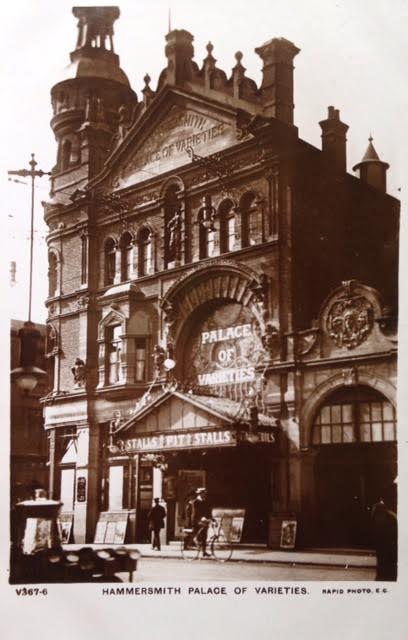 He and his son retained the theatre until 1897. In 1902, Acton Phillips was elected as the second Mayor of Hammersmith.

The Italian marathon runner Dorando Pietri, appeared there nightly the week after he was presented with a special gold cup by Queen Alexandra. This followed his disqualification at the 1908 Olympics when Pietri had to be assisted by sympathetic spectators after he had been the first to enter the White City Stadium. 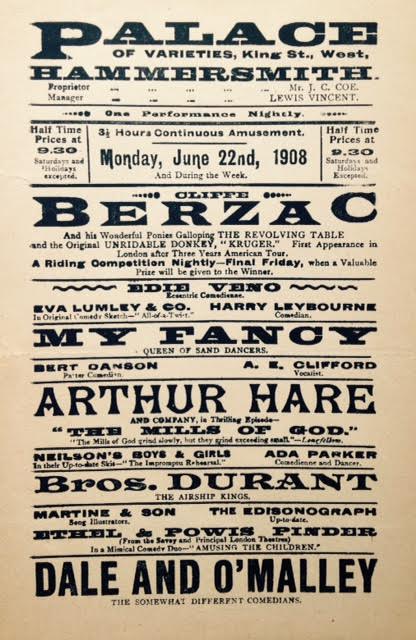 With the decline of the Music Hall, mystery plays, reviews and melodramas were staged. In August 1927, ‘Fun Strokes’ presented the public stage version of television.

Then in the 1930’s, the theatre often featured a mixture of variety turns and films, but it was forced to close in September 1940.

It suffered damage during the War and in 1947, Froy’s of King Street, acquired the theatre for extensions to their premises. The building was then demolished in 1950 and covering the site now is the Kings Mall Shopping Centre.