Rangers took on Middlesex Wanderers in a friendly match at Loftus Road on Monday, 5th April 1954. The following report later appeared in the West London Observer:

‘The season of floodlight matches at Loftus Road ended on Monday evening with a match against Middlesex Wanderers, Queen’s Park Rangers eventually winning by 3-2.

Wanderers, with nine amateur internationals, were by no means disgraced; in fact, at times they showed much better ball control and positional sense than their league opponents, and they would give a good account of themselves against most 3rd Division teams.

In the opening stages, play was quiet, but in the eighth minute Smith tested D. Williams in the Wanderers’ goal with a first-time shot which was well saved.

Wanderers immediately switched play to the other end and forced a corner which J. Rawlings headed just wide.

Rangers soon returned to the attack, and a back-heel by Smith gave Petchey a chance, but he shot into the keeper’s hands.

Middlesex were by no means being outplayed, and Gullanwas well beaten by W. Ormond but, luckily for Rangers, the ball hit the crossbar.

After 20 minutes Rangers went into the lead. Clark cleverly beat two defenders and gave Cameron the simplest of chances.

Wanderers, undeterred, fought back gamely and at times gave the home defence plenty to do.

They were rewarded for their persistency in the 31st minute when a faulty pass by Cameron was seized upon by A. Evans who sent his winger away and, from the latter’s centre, A. King scored with a perfect header.

Wanderers played some very good football, especially in defence where right-half L. Topp was outstanding and, along with D. Adams and A. Evans, formed a strong half-back line.

Rangers took up the initiative on the resumption, but this was short-lived. However; the Wanderers’ defence got out of trouble by good football.

Yet, despite this, Rangers went ahead again. After Cameron had made a bad shot at goal, the ball went out to Kerrins, who was on the spot to put the ball in the net.

Wanderers came back fighting and J. Rawlings, at inside-right, was playing a sterling game, first drawing the defence, then slipping the ball to his centre, but the ball did not run too kindly.

In the 34th minute, Clark added No.3 for the Rangers, but still the visitors refused to give up and, six minutes later, the home defence were a bit too clever; a centre went over to A. King, who beat Gullan to the ball to make it 3-2.

Wanderers went all-out for the equaliser, and almost on time P. Woosnam nearly got it, but Gullan happened to be in the right spot for his shot.’ 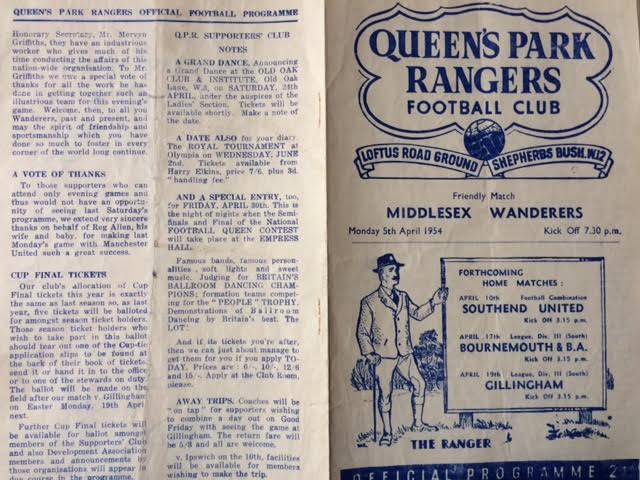 Included in the Wanderers’ side was Ian Harnett at right-back, who made over 300 appearances for Queen’s Park and gained sixteen caps for the Scotland amateur side.

At No.11 was Willie Ormond who went on to play for both Hearts and Hibernian and also became Scotland’s manager in 1973.

Also playing that day was Phil Woosnam who later played for Wales.

The Wanderers were founded by Horace and Bob Alaway in 1905. The programme notes reported that:

‘Wherever they go the Wanderers always take their mascot, a little lamb, and a special ditty written in its honour is always sung. The present mascot is about 20-years old, having safely withstood several cleanings.’

(Thanks to Colin Woodley & Ray Marno for their assistance)