League leaders Liverpool travelled to Loftus Road on 7th May 1977 to take on a Rangers side languishing in the bottom five. Reg Dury’s match report appeared in the News of the World the following day:

‘Liverpool moved a point nearer the league title and the treble with manager Bob Paisley admitting: “At one stage I’d have settled for a 1-0 defeat!”

Paisley explained that apparently defeatist attitude by adding: “QPR were so much on top in the first-half we were lucky to be only one-down at the interval. So, I was concerned with preserving our superior goal-difference over Manchester City.”

But Liverpool, unbeaten now for 14 games, came storming back to equalise after dominating the second-half.

Three points from their remaining three games will make absolutely sure of championships in successive seasons, something no club has done for 18 years.

At the final whistle Paisley was happy to pay this tribute to Rangers: “They may have had a bad season, but on their day they’re as good as any side in the First Division.” 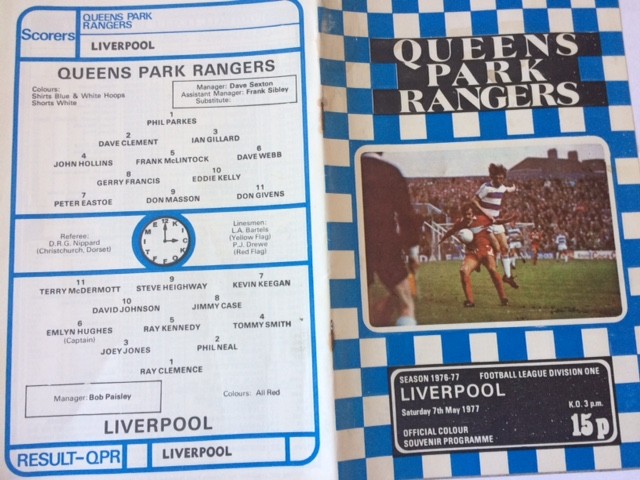 It seemed it would be one of those days for Rangers when they ran a ponderous Liverpool ragged in a one-sided first-half.

Top scorer Don Givens shot Rangers into a 10th minute lead after John Hollins, Gerry Francis and Peter Eastoe had combined to set up the chance.

Then, with 32 minutes gone, Givens blotted his copybook by missing a “sitter” which could have put the result beyond doubt.

Liverpool ‘keeper Ray Clemence was left groping by a terrific Peter Eastoe shot which rebounded from a post. Givens, with the goal gaping, clipped the outside of the other post when it seemed easier to score.

That could have settled it, for a couple of minutes earlier Phil Parkes had stopped a Kevin Keegan shot at point-blank range.

A minute later Fairclough was replaced by substitute Ian Callaghan with Jimmy Case pushing up into attack. It was a gamble which paid a 68th minute dividend when Keegan headed on a Ray Kennedy cross for Case to equalise.

Skipper Gerry Francis had an impressive match, despite hurting an ankle in the closing stages, and should be fit to continue in an unchanged side at Derby on Wednesday.

Liverpool injuries are mending as well. Steve Heighway will be back at Coventry on Tuesday, while Paisley is hopeful that Phil Thompson and John Toshack will be available for the European Cup Final.

Neither will be considered for the FA Cup Final with Manchester United. Paisley has enough problems on his plate for Wembley in deciding between Callaghan, Fairclough and David Johnson for one place in the line-up.’

Dave Sexton said after the game: “It’s a pity we didn’t get that second goal because we didn’t put our game together in the second-half.”

This result put Rangers third from bottom, but they had games in hand on a number of clubs above them.

Supporters Club coaches were scheduled to leave for Derby at 2.30pm the following Wednesday and there was also a ‘Rangers Special’ departing from St. Pancras at 16.01.

QPR went on to lose 0-2 at the Baseball Ground.