Rangers took on Manchester City at Loftus Road on 5th March 1994, having been without a league match for fully four weeks. There was also much speculation at the time about the future of QPR manager Gerry Francis.

‘Goalkeeping errors denied Rangers their first home win of 1994 and earned City a priceless point in their relegation fight.

But these are nervous times for supporters of both clubs. As a fervent QPR fan I am apprehensive about the immediate future. It is essential contracts are settled with manager Gerry Francis, his staff and players, for the benefit of Rangers and their supporters.

I have known Gerry since he was a QPR player 18 years ago and I believe it is vital that he stays. His team plays great football and players have flourished under his guidance – despite him having to sell £6 million worth of talent.

What other Premiership side has spent so little to be in the top-half of the table with three games in hand and has increased attendances? What more can a club want from a manager who is prepared to commit himself for a further one, two or three years?

Francis said afterwards: “If it happens that I’m offered a new contract, it happens. If it doesn’t it doesn’t. It is entirely up to the chairman. It is not in my court.” 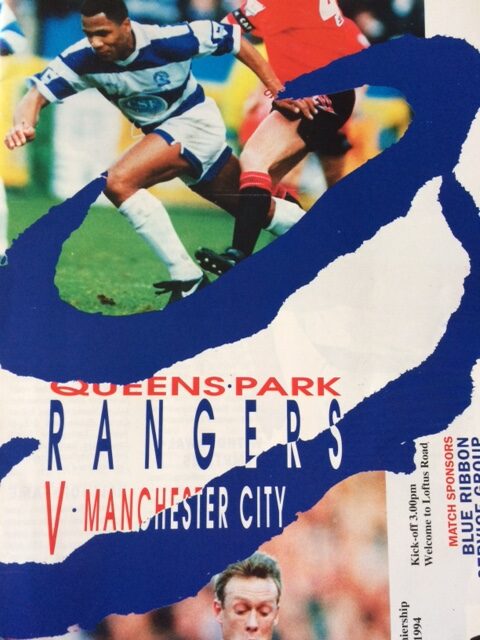 There were only eight minutes on the clock when Steve McMahon was booked for bringing down QPR’s Gary Penrice.

Rangers striker Les Ferdinand won everything in the air in front of England coach Terry Venables.

His 16th minute header following a Ray Wilkins chip, was finger-tipped for a corner by goalkeeper Andy Dibble.

Ten minutes later City were behind. McMahon’s back-pass was followed up by Penrice and Dibble’s clearance reboundedoff the Rangers player into the net.

“Officer” Dibble was in trouble again when he grabbed the ball as Vonk pulled it down into the area. But David Bardsley’s fierce 15-yard free kick rebounded off City’s defensive wall.

Rangers, who had not played for a month, dictated the first-half and restricted City, who had not won away since September, to breakaways.

Rangers’ goalkeeper Jan Stejskal made a critical save just on half-time when he smothered David Rocastle’s shot and early in the second-half Penrice nearly made it 2-0, only for Vonk to clear it off the line.

Rocastle shot straight at Stejskal, whose double-fisted punch sent the ball down, through his legs and into the net. The fans who ran on to congratulate Rocastle might as well have gone to Stejskal.

Four minutes from time, Trevor Sinclair clipped the ball over Vonk before shooting beyond Dibble only for the ball to hit the top of the bar. But overall, I have to admit, City just about earned their point.’

The following week the R’s recorded a rare victory at CarrowRoad with goals from Simon Barker, Darren Peacock, Devon White and Gary Penrice, in the 4-3 win.

As for Gerry Francis, he was to move on to Tottenham in November.