On 12th March 1994, QPR travelled to Carrow Road to take on a Norwich side who had drawn their previous four home games. Brian Scovell wrote the following match report:

‘By his own high standards England Under-21 captain Chris Sutton had a pretty ordinary match at Carrow Road as a confidence-sapped Norwich sank to their most embarrassing defeat of the season.

Going down 4-3 at home to such a vibrant, exciting side as Queen’s Park Rangers may not appear to be too much of a disaster, but the expression on the faces of John Deehan’splayers showed how much it hurt.

QPR manager Gerry Francis, happy and smiling these days despite the lack of assurance from his chairman Richard Thompson that he wants him to stay, was delighted to see 29-year-old former electrician Devon White, score twice to take his record as a stand-in for Les Ferdinand to five in five matches this season.

The game turned at 1-1 when centre-back Rob Newman was forced to retire with an arm injury in the 54th minute.

With no one to compete with the 6ft 4in Devon White in the air, Deehan had to switch Sutton, who had missed with seven straight goal attempts, into defence.

He did well enough at the back though, when Norwich went 3-2 down he reverted to attack but he could not alter the outcome.’ 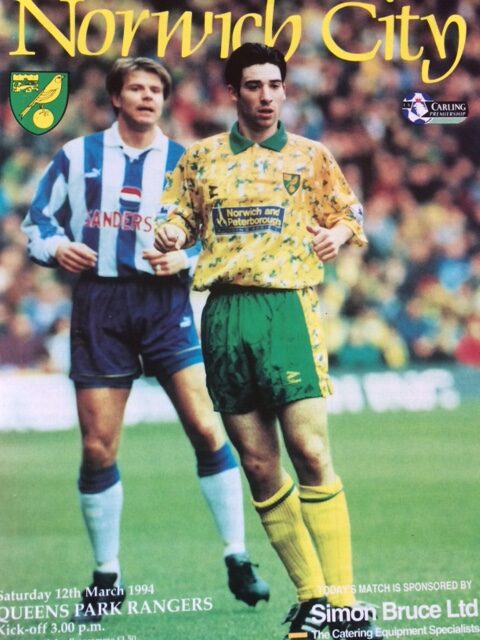 Efan Ekoku had twice put the home side ahead. The Rangers goals came from; Simon Barker, Darren Peacock, Devon White and Gary Penrice.

Gerry Francis said after the game: “Devon was absolutely outstanding – he just keeps getting better and better. The way he was getting on the end of crosses and heading the ball down, we just had to score.”