Formerly the Pavilion, the cinema at 58, Shepherd’s Bush Green reopened in 1955 as the Gaumont.

‘Rock Around the Clock’ was released a year later in the UK. The following article appeared in the West London Observer on 31st August:

‘Reports of near-riots at the Gaumont, Shepherd’s Bush, when ‘Rock Around the Clock’ was shown on Sunday have been emphatically denied by the assistant manager, Mr Peter Corneille.

He told me last week that reports which appeared in the National Press on Monday gave a wrong impression of what went on. One paper even stated that police were called to quell Teddy Boy dancers. 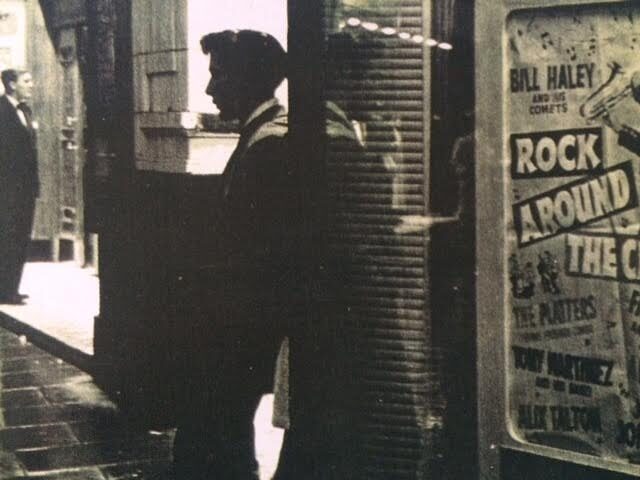 Mr Corneille has given me his side of the story – and it accords completely with the story told to me by others who were at the performance on Sunday afternoon.

It is true that the audience mainly composed of young people, grew so enthusiastic towards the end of the film that they were clapping their hands rhythmically, and a few were jiving in the aisles.

It is true that a few happy-souls decided to jive on the stage while the film was still running – but they returned to the floor when Mr Corneille asked them to.

And it is true that as the film ended, and the house lights rose, a crowd gathered round Mr Corneille, lifted him on their shoulders, and chaired him accompanied by the laughter of the amused audience through the cinema.

Mr Corneille’s comment on all this was: “There was no harm done, no damage, and no stupidity. It is wrong to call the kids “Teddy Boys”. They were having fun – in a rather unorthodox manner perhaps – but without causing trouble. I took it all as a laugh and a joke.”

“No police were called. There were no police on the premises at any time during the performance,” he added.

Well, that sounds like ‘audience participation’ in a big way!  I’m sure, that from what others have told me, that the youngsters were simply having a good time, and didn’t mean to trouble anybody.

As Mr Corneille walked round the cinema an 18-year-old girl came out of one of the aisles and said to him: “It’s a wonderful film. I could kiss you for this.” Then she flung her arms round him and kissed him!

But I daresay the management – and perhaps some of the audience – feel relieved that there isn’t likely to be another Rock ‘n’ Roll film for a little while.’

The manager, Mr J. Pound, was attacked by a Teddy Boy – one of a group who entered the cinema by a side door (without paying), towards the end of the show.

Mr Pound was struck just above the eye, and later at hospital had eight stiches in the wound. “It was only this group who caused trouble. The rest of the audience was well behaved,” he said.

Seventeen seats were damaged by the same crowd of boys.’

One thought on ““Rock ‘n’ Rollers did no Harm” – Manager of the Gaumont Cinema, Shepherd’s Bush in 1956”