On 18th December 1897, QPR took on Fulham in a London Senior Cup tie at Harvest Road.

Due to the foggy conditions the game was abandoned, however, it was then agreed that it could continue as a friendly match. The following report later appeared in the Sporting Life:

‘Considerable rivalry has always existed between these prominent West London Clubs, and as a consequence, quite 3,000 spectators braved the elements to see the contest at Harvest Road on Saturday.

The Rangers won the toss, and at once forced matters. After five minutes, proceedings were temporarily suspended through Walburn being injured. This player, however, resumed operations.

After this last occurrence, Fulham maintained a strong attack on the home citadel, but Hunt, who is at present in grand form, proved equal to all emergencies.

The brothers Wallington combined prettily on the left-wing, and hereabouts Mr Kent caused a suspension while he declared the game to be only a “friendly”. This proclamation did not deter both elevens from displaying much vigour.

Hadwick was next conspicuous with some fine dribbles, despite Knight’s marked attention. The Rangers’ outside-right centred finely, and once hit the post. “Thomas” infused some determined tackling and prevented the Wallingtons’ many attempts becoming effective.

Eventually A. Wallington gained the first goal, McKenzie (or A. Wallington?) adding a second, and this was the score at half-time.

Continuing, the players seemed to forget that the game was only an ordinary match, and Knight’s style was received unfavourably by the crowd.

Maile cleared well on several occasions, although once the ball was netted, but the point disallowed.

The thick fog rendered it most difficult to accurately follow the game. Robertson made a beautiful run, completely mastering Walburn, but the Fulhamite shot badly.

Hunt next showed his ability by warding off a strong bombardment. A foul was here accorded the Rangers, McDavid successfully taking the penalty with a ground shot. Nothing more resulted and the final score read: Rangers, three; Fulham, 0.’

A week later on Christmas Day, the proposed friendly against the Vampires wasn’t played due to the continuing foggy conditions. 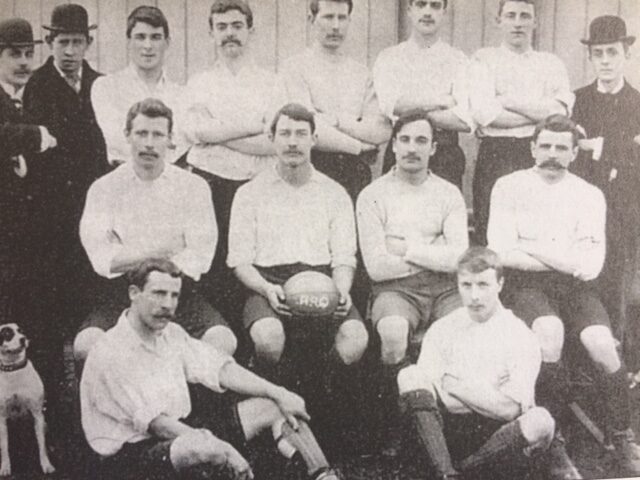 The Cup tie was re-arranged for New Year’s Day and the West London Observer covered the match:

These old local rivals met in the replayed tie, fourth round, at Harvest Road, Kilburn, to decide who should meet Barking Woodville in the next round.

The Rangers have recently beaten Clapton and drawn with a strong team of Casuals, and their chance against Fulham was greatly fancied.

The ground was in an awful state when the game started, but after 20 minutes play Freeman easily beat Hunt, and scored for Fulham.

Just before half-time, the Rangers equalised from a free kickthrough McKenzie, and the score was one-all at the interval.

Musslewhite scored for the Rangers from a free kick after 20 minutes play, and E. Wallington added another with a fine shot.

Then from a corner, Fulham scored, and shortly after Freeman made the scores level. Ives scored again, and Fulham won an exciting game by four goals to three,’

And in the Willesden Chronicle it was reported that: ‘The teams met on Saturday at Kilburn and had rather a rough game, Evans getting his shoulder put out by Fulham’s nasty play.’