He sadly passed away on 20th July.

Mick was well known to many R’s fans. I would have first bumped into him in the Loft in the 1970’s and then regularly all over the country at away games.

Edward Lestrange wrote on Facebook: ‘In 1969 we went to buy a car from a second-hand car dealer opposite ‘The Sun’ in Askew Road. Mick nearly wrecked the car by jumping up and down on it in order to test the suspension!

Despite his disability, I will always remember Ellie arrivingon his bike to join a group of us as we set out at midnight for the walk from Hammersmith for the ‘Our QPR’ fundraiser to Wycombe.

He helped out by carrying some of our baggage on his handlebars. Eventually his bike had to be dumped as we neared our destination!

The last time I spoke to him was three years ago in the Hammersmith Club in Rutland Grove after Bill Cox’s funeral. 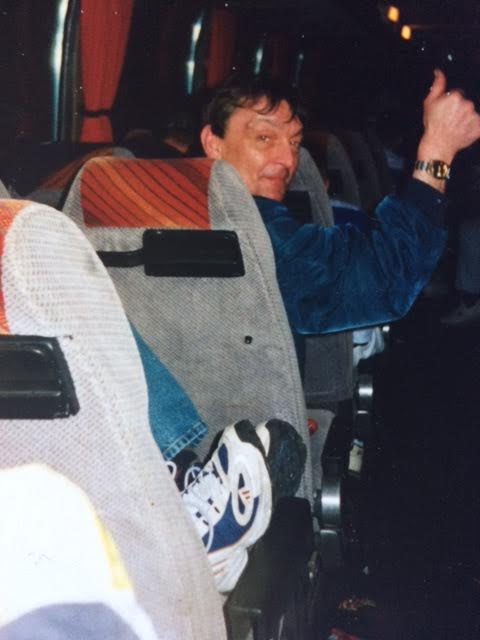 Prior to the Service at Mortlake, the funeral procession drove past the Stadium shortly after 11am.

The entrance music was Dionne Warwick’s: ‘That’s What Friends Are For’ and there was a hush as the pallbearers; members of the family and Gary Colton, entered the Chapel. The Service was then conducted by Nicholas Pnematicatos.

I couldn’t make it for the Wake unfortunately, but I heard that there was a large turnout after at ‘The Askew’ on the Uxbridge Road.

An appeal was made via ‘JustGiving’ to raise sufficient funds for a remembrance plaque near the Club Shop as a lasting and fitting tribute to Mick. This was quickly achieved, and the balance was donated to St. Mungo’s Charity for the homeless.

Mick’s final request was that his ashes be scattered on the pitch.