Rangers travel to East London this Wednesday to take on Leyton Orient in the first round of the Carabao Cup.

Apparently, the idea of a ‘League Cup’ came from Stanley Rous and the Football League Secretary at the time, Alan Hardaker, was instrumental in getting the competition underway.

The R’s took on Port Vale at Loftus Road on 17th October1960, and ahead of the match two days earlier, the editor wrote the following in a reserve programme: ‘The much-criticised Football League Cup comes to Shepherd’s Bush on Monday evening when Rangers entertain Port Vale in a floodlit first round tie (7.30pm).

It’s so easy to decry a new competition. It’s so easy to say it hasn’t the appeal of the FA Cup. My attitude is let’s give the Football League a chance. Rangers are committed – along with 86 other clubs – to take part in the League Cup experiment.

I was at the annual meeting of the League last Spring and my understanding is that the new Cup is a forerunner of a new set-up for English soccer.

Financially, Rangers won’t say “No” to a run of success in the new Cup and I am sure supporters want to see a good game whatever the label. So, let’s reserve criticism, if any, until a little later – and let’s get on with the game.’ 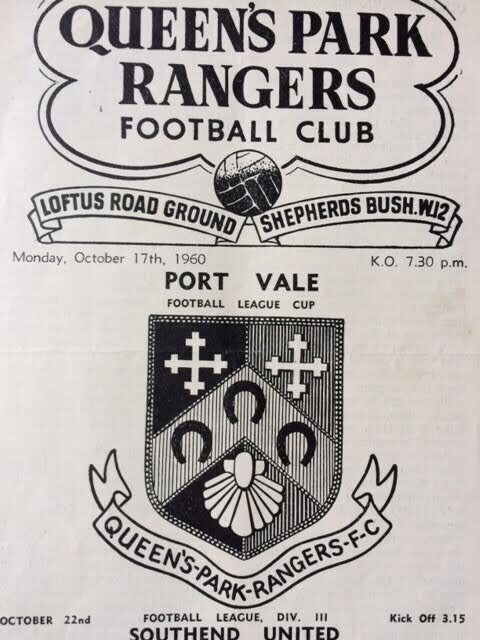 Bernard Lambert took his place in the Boys Pen with some of his old school mates from Victoria and recalls that Stanley Rous was a VIP guest of the Club that night. “Tempo’s”match report appeared in the local Gazette later that week:

‘Consistent centre-half, Keith Rutter, had the last laugh when he lofted in a goal nine minutes from the finish to give struggling Queen’s Park Rangers a lucky draw against a more workmanlike Port Vale in a disappointing first round Football League Cup-tie at Loftus Road on Monday.

Rangers took the lead against the run of play when Mick Bottoms allowed Dave Cockell’s pass to go through to Mark Lazarus, who promptly scored in the 23rd minute.

In this good spell, Bottoms had a fine shot deflected on to the bar by a defender and Bedford headed against the crossbar.

Though centre-forward Carbishler smashed a shot against the bar, Vale had fewer chances in the second-half.

Rutter gave Rangers a replay chance when he lofted the ball home after a left-wing corner in the 81st minute.’