Following a 2-1 win at Walsall the previous Saturday, the R’s took on Coventry City at Loftus Road on 2nd November 1957. This match report appeared in the Coventry Evening Telegraph two days later:

‘For almost 90 minutes Graham Spratt and the Coventry City defence were in continual action at Loftus Road on Saturday, where Queen’s Park Rangers won 3-0 and might have run up double figures in the most one-sided game I have seen.

To say that City had an attack is merely to record that they took the field with eleven men. Apart from occasional forays from Peter Hill and Ray Sambrook, the rest were just “not there.”

Only two shots did the City manage all through – both in the second-half. Hill had a fine effort saved at full length by Springett and later – much later – the Rangers ‘keeper pulled down another attempt from McPherson.

It would be no great distortion to say that had Springett gone off after the break he would not have been missed.

Just how feeble was this City attack? On paper it looked the strongest the club has been able to field this season. In reality it hardly existed although Hill did his best to infuse life into a lost cause.

Rogers and Boxley were never in the game at all and had precious little to contribute to a line that was sorely in need of vitality. The City have scored less goals than any other club in the Football League. 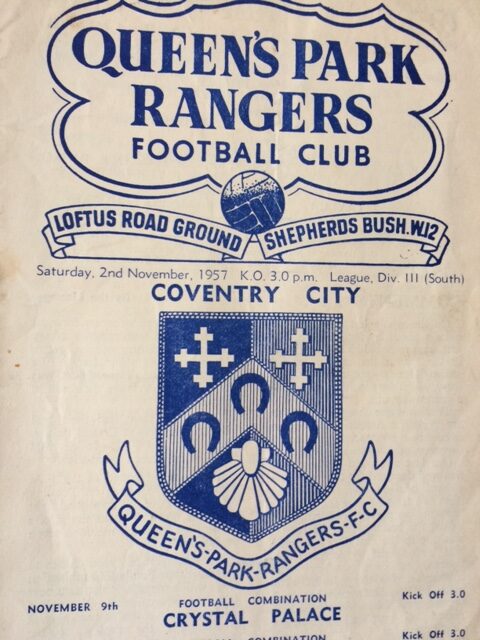 Spratt earned an ovation from the Rangers’ crowd at half-time and at the end. He made brilliant saves all through the game from every Rangers forward, and also one fantastic effort off a blinding shot from wing-half Petchey, which looked a goal all the way.

Sooner or later, Rangers, with their non-stop pressure and greater speed and determination, were bound to score. It took them 54 minutes before they broke through City’s dogged and often desperate defence.

Then, left-winger Kerrins flashed into the middle to flick home with his head a right-winger corner – a beautiful goal.

In the 72nd minute, Kerrins rose to another corner and neatly headed out of Spratt’s reach.

Two minutes from the end, amateur Leslie Locke smashed home a left-foot volley from 30-yards out.

In addition, Rangers twice hit post and bar, and three times before half-time missed by inches. Afterwards it was one-way traffic. If the City were not packing their goal for a corner, then Spratt was taking one of his many goal-kicks.

Shots rained in without interruption – or so it seemed. By this time, the City rearguard, already grossly overworked, was just about played out.

Petchey, who got a last-minute equaliser for Rangers in this corresponding match last season, once flashed the ball into the roof of the net with the hardest shot I have seen for a long while. Luckily for the City the whistle had gone for an infringement a split second earlier. Spratt never saw the ball.

With this success, Rangers broke their bogy against City at long last. They had won only once in ten league games before Saturday. But the Londoners will rarely have such an easy game again this season. They had very few defensive worries even in the first-half and none at all near the end.’

The editor commented in the match programme that the stewards would be keeping a watchful eye for anyone letting off fireworks.

And this: ‘A letter was received last week from Mr Ted Davis claiming that he was one of the oldest supporters of the Club, having watched his first QPR game in 1895 at Queen’s Park and enclosing a photograph of the 1908-9 team, which he requested be returned.

Unfortunately, Mr Davis, who states that he is now a farmer in Somerset, forgot to put his address on his letter. If by chance Mr Davis reads this note or anyone else knows Mr Davis’s address, will they please advise the Club Secretary and the photograph will be returned.