I first remember Paul from the old Loft days in the 1960’s and sadly, the last time was to be two years ago in St. Mellitus Church for Emily Capell’s gig there as part of the Hanwell Hootie Music Festival.

It was at the Cambridge pre-season away game in July that I learned of Paul’s passing.

There must have been around 400 mourners at the Mortlake Crematorium on 5th August. I eventually got close enough to see and hear most of the Service.

The entrance music was the Otis Redding classic: ‘These Arms of Mine’ followed by ‘Ordinary Joe’ by Terry Callier.

Paul was also a huge music fan and Al Green’s; ‘How Can I Mend A Broken Heart’, ‘I Love Music’ by the O’Jays and Paul Weller’s poignant, ‘You Do Something To Me’, all featured during the course of the Service.

The eulogy was read by his son, Matthew and tributes and poems came from other members of the family and also hislifelong friend, Mark Cox.

The final choice of music was: ‘You Gave Me Love’ by the Crown Heights Affair. 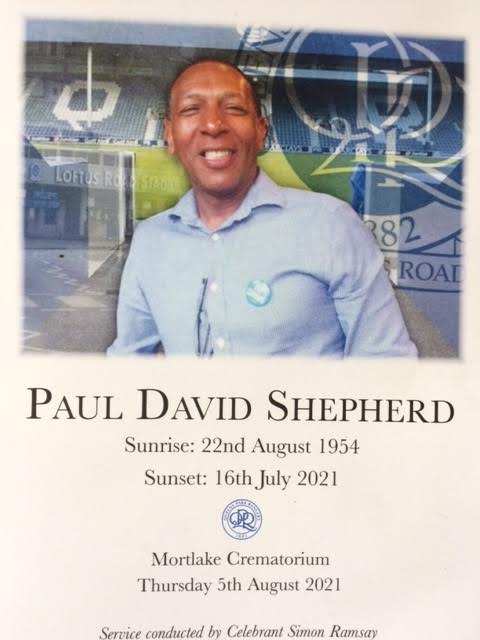 ‘It is with broken hearts that we announce the passing of Paul, a wonderful husband, father, grandfather, uncle and brother.

A great man who was always smiling, dancing and singing. He will be greatly missed by all his family and friends.

Paul was a lifelong supporter of QPR. Some would say that QPR was his first love, and he always believed no matter how bad they got. Maybe you could do it for him this season?

Loftus Road will not be the same without him. We will love and miss you always.’

Paul always had a smile on his face, God Bless you mate.

2 thoughts on “In Memory of Paul Shepherd”