I met up with Sammy at Park Royal and we then made our way to Hounslow East Station before taking the 111 bus to Hampton.

The match attendance had been capped at 500 and all tickets were sold prior to kick-off.

Out of favour right-back Todd Kane is currently training with the U23’s prior to finding a new club. 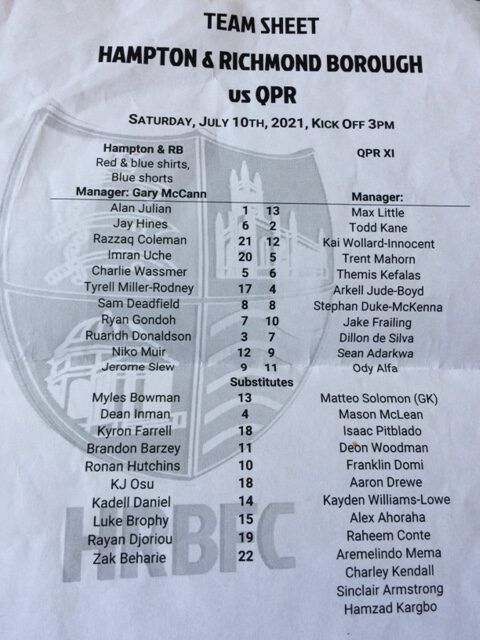 The home team started the stronger of the two sides. A through-ball almost set-up the Beavers player but Max Little was able to collect in time.

Then a dangerous ball from the right was cleared and narrowly evaded the crossbar. The resulting corner was headed just past the far post. A minute later, Max Little knocked a 25-yard drive over the crossbar.

The QPR keeper then got a strong hand to a speculative effort from 20-odd yards and shortly after that a flicked header went just inches wide.

Some of the R’s players were constantly giving the ball away and I have to say the home team really should have capitalised on their early dominance.

At the other end, a great ball across the six-yard box just evaded an R’s player and then continued on its way for a corner.

Five minutes or so before the break, Razzaq Coleman’s superb shot from just wide of the box, hit the corner of the crossbar.

However, Rangers almost took the lead before Mr Breakspear’s whistle when a shot from within the box was well blocked. Half-time: 0-0.

Hampton made eight changes, whilst the R’s made two, one of which was 17-year-old goalkeeper Matteo Salamon.

Into the second-half and the home side almost went in front after a ball floated across the six-yard box somehow evaded an outstretched boot!

The Beavers took a deserved lead on the hour mark. An initial effort was well-blocked, and the follow-up brought a great save from the Rangers keeper. But the resulting corner was headed into the back of the net by Dean Inman.

Hamzad Kargbo had only been introduced five minutes or so earlier and he equalised with a superb goal. Twisting and evading defenders in the box, he knocked the ball under Myles Bowman from close range.

Hampton got their noses in front soon after. A good move followed after the R’s had given the ball away. Kadell Daniel was set-up and he then proceeded to belt the ball into the net from inside the box.

The impressive Ronan Hutchins increased the home side’s lead. When one-on-one with the QPR keeper, he was able to pick his spot.

Charley Kendall did pull one back in the 83rd minute following an excellent build-up from midfield.

There was still time for the Beavers to add a fourth goal. After Kadell Daniel had won the ball, Hutchins drilled his shot into the bottom corner.

My thanks once again to Tracey Hathaway for her assistance and good luck to Hampton & Richmond Borough for the season.