The Coronation of King George V and Queen Mary took place on this day in 1911 at Westminster Abbey. The two following articles later appeared in the West London Observer:

Here, the traders, with enthusiastic goodwill, had vied with each other to make the road as bright as possible after dark, and they succeeded.

Numbers of the shops were electrically illuminated, while others were liberally ornamented with vari-coloured fairy lamps. The Police Station, too, presented quite a pretty spectacle.

A few of the premises in the Goldhawk Road exhibited illuminations, but in respect of Uxbridge Road, in view of the number of houses in it, the exhibition was decidedly poor.

Mr A. Willmots premises were prettily illuminated, and an attractive electrically-lit design was seen at Sir William Bulls’s private residence, with the initials “G.R.” on either side of it, while several of the adjoining houses had succeeded in effectively illuminating the exteriors of their premises.

There was also a good display at the Conservative offices, facing Shepherd’s Bush Green, with bunting and electric lights. In the centre of the building was the illuminated arms of the Association which was bordered with a row of white lights.

There were very few houses, indeed, where bunting or flags were not exhibited. The decoration of the Empire Music Hall, with the festoons running from the building to the trees in front, was carried out on a somewhat lavish scale.

In this respect the Gladstone Club, Goldhawk Road, made a good show. Few establishments were illuminated more effectively than were the shops of Farmer Bates.

The decorations in several of the side roads in Shepherd’s Bush were well worth seeing.’ 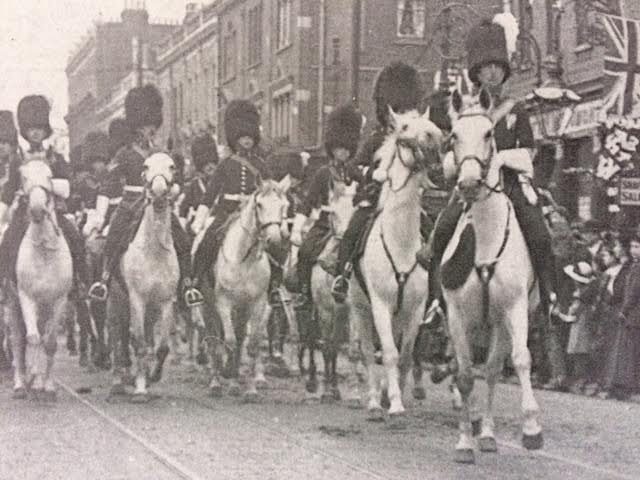 The room from end to end was festooned with flowers. Flags and shields were suspended from the beam, and the window sills filled with scarlet geraniums, the whole looking extremely pretty.

The decorations were placed in position by Roland Hall, Percy Grant and Stanley Watson. Each lad was provided with a serviette and a plate, using his Coronation mug for the first time.

Thanks to the generosity of Mr W. J. Smith, the children were provided with strawberries. The tea consisted of bread and butter, cake of various kinds, and pasties of every description, which they thoroughly enjoyed. The extras were supplied by some kind friend anonymously.

After tea, the girls joined the boys and excellent entertainment was provided by Mr Ireson Woods, ventriloquist and conjuror, who, needless to say, kept the youngsters highly amused.

The National Anthem concluded the proceedings. Each boy and girl were given an orange and a mug as they left.’

(Shown above are the Scots Greys as they pass near the junction of Uxbridge Road and Wood Lane on their way to the Coronation. Thanks to Colin Woodley for his assistance)