Situated virtually next to ’The Seven Stars’, the Park Cinema opened its doors at 6pm on 27th June 1912.

Prior to its opening the following article appeared on 16th May in ‘The Bioscope’, titled: ‘Application Against a Shepherd’s Bush Cineatograph Company.’

‘In the Chancery Division on Friday, before Mr Justice, on behalf of the occupier of No.251 Goldhawk Road, application was made for an injunction to restrain a Shepherd’s Bush Cinema Company from obstructing the light and air.

Counsel stated that the matter was before the Court on the previous Wednesday, and it was ordered to stand over until Friday, there having been a specific intimation that the defendants ought not to proceed with the building (to be known as the “Park Cinema”, of which the plaintiff complained.

Mr Assheton Cross (for the defendants): “In point of fact we have not proceeded with it.”

Counsel for the plaintiff said that, according to a report of a surveyor who had been sent to inspect the building on the previous day, the work was proceeding, and that all possible expedition had been used to complete the building.

An affidavit by the plaintiff stated that he had taken the premises in Goldhawk Road on a lease for seven years and had expended £300 on the interior.

The cinema, it was alleged, would obstruct the light and air to the garden and conservatory. The new building was 17ft 6in from the plaintiff’s boundary wall, and 10ft from his windows.

His Lordship: “How can I tell them to pull down what they have built?” Counsel said he was prepared to take the risk.

Mr Assheton Cross: “We offered to raise the vinery wall 4ft at our own expense.”

His Lordship: “I shall appoint an architect to inspect and report to me.”

Counsel for the plaintiff: “And in the meantime?”

His Lordship: “I shall do nothing. It is a most serious matter to stop the thing now. I shall appoint an architect. That is an interim order, and the motion stands over.” 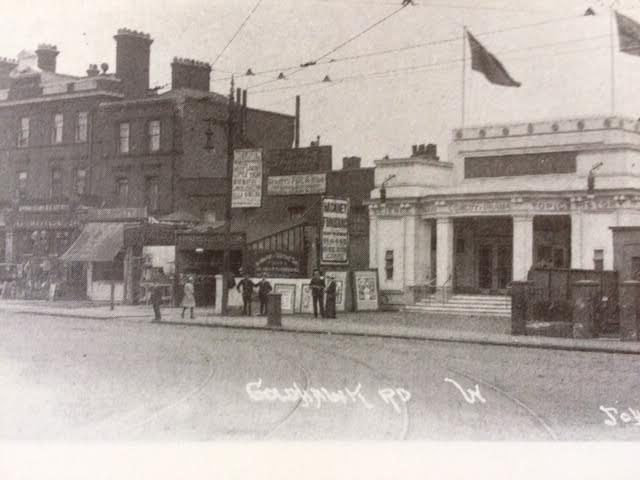 The West London Observer reported on 21st June 1912 that: ‘The Park Cinema, Hammersmith’s latest picture theatre, will open next Thursday evening, at six o’clock, with a strong and attractive programme.

The new theatre is in the Goldhawk Road, opposite the pond, and has been equipped with all the newest and most modern improvements.

The ventilation, as it was shown to a representative of the “Observer” yesterday, by Mr W. A. Curnock, the manager, is of the very latest type, the roof being fitted with the new Louvre shutters which, working in conjunction with the ejector fans, guarantee a constant supply of pure, cool air.

There will never be any danger of fire at the Park Cinema. The theatre management has arranged with the producers of picture dramas at home, in France and the United States for the early use of their finest films.

It will be quite worth a visit to the “Park” to hear the Cinfonium, the piano with the orchestral effects. There is nothing like it in the neighbourhood.’ 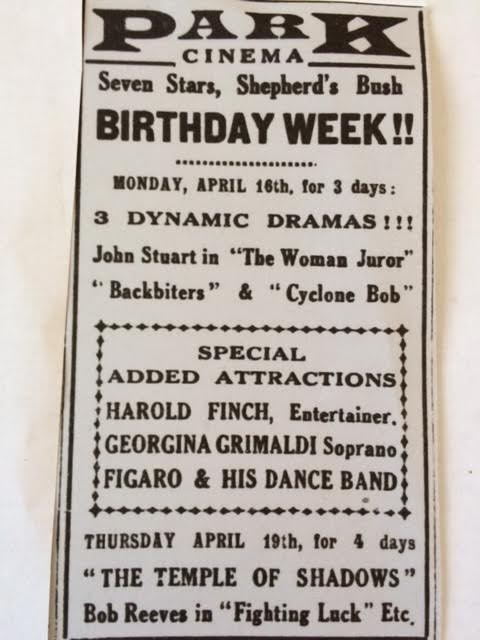 The following article appeared in the West London Observer on 20th April 1928:

‘Birthday week is proving a huge success at the Park Cinema, Goldhawk Road, and Mr Gadsby is to be congratulated on the very fine programme of pictures and variety he is presenting.

The attractions tonight include: “The Temple of Shadows,” by the producers of “Doctor Fu Manchu”, Bob Reeves in “Fighting Luck”, together with Harold Finch, the popular entertainer; Georgina Grimaldi, the celebrated soprano, and Figaro and his dance band, all of whom will give a change of programme to that given during the initial part of the week.

Next Monday, Tom Mix will be seen in “Dick Turpin,” also Henry Ainley in “The Curse,” and the usual funny comedies, etc.

Next Thursday the programme will include Syd Chaplin in “The Man on the Box,” and Bob Reeves in “A Desperate Chance.”