Rangers travelled to Stamford Bridge on 5th January 1974 in a FA Cup 3rd round tie. The match finished goal-less and the replay was then scheduled for three days later.

This was during the ‘Three-Day Week’ period which had begun at the start of the year when commercial use of electricity was limited to three specified consecutive days each week.

However, due to heavy rain the game was postponed at the last minute and was then re-arranged for another 1.30pm kick-off a week later. The following match report was written by Robert Oxby:

‘Queen’s Park Rangers had to wait until the 65th minute of a match they dominated at Shepherd’s Bush yesterday before the immensely-gifted Stan Bowles scored the decisive goal, on a heavy pitch which strained the physical resources of both sides.

Bowles, whose performance in the conditions underlined his right to become an England player, left the field on a stretcher, having succumbed to a fierce tackle by Harris, who had been booked for a foul on him in the 17th minute.

Harris had also received a booking in the drawn match at Stamford Bridge – again for a foul on Bowles – and his unbridled performance in this FA Cup third round replay symbolised Chelsea’s current desperation.

They are beset by economic problems, an injury crisis, and continuing traumas concerning Peter Osgood and his future. Perhaps it is not surprising that yesterday they were outplayed.

The measure of Rangers’ control is that Chelsea did not gain a corner until the 80th minute, and that Parkes, Rangers’ goalkeeper, was troubled only once – when Webb struck the crossbar with a superbly-hit shot in the 85th minute.

In the circumstances, the necessary expedient of playing Webb at centre-forward was a waste of a player who was needed badly in his usual defensive role.

Seldom were Chelsea able to penetrate into the Rangers’ half and give him any opportunities. The only encouragement for Chelsea was the performance of their youngest player, Britton, and their oldest, Hinton.

Britton showed commendable spirit, running so tirelessly that one wondered how he could maintain the effort.

Hinton, aided by the inelegant but effective Droy, managed time and again to intervene when Rangers’ incisive forwards, helped by the overlapping skill of Clement, played one-twos in the ploughed-up penalty area.

With wingers of the skill of Givens and Thomas, and creative strikers of the ability of Francis and Bowles, Rangers are now one of the most formidable and positive sides in the First Division. 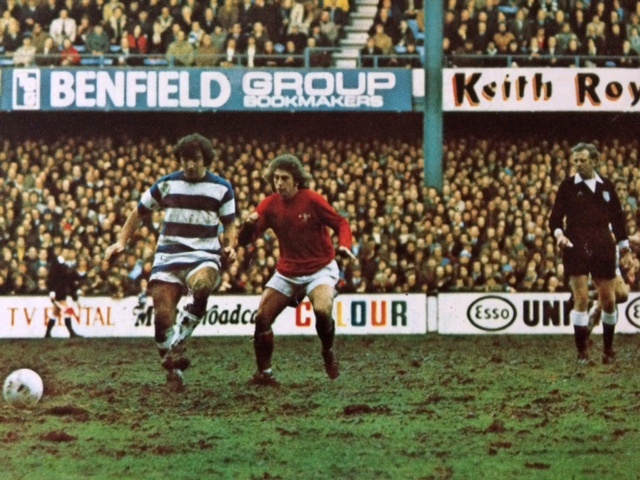 They derive enormous benefit from the undying solidity of Mancini and McLintock, and the distributive awareness of Leach and Venables. Small wonder Chelsea were under pressure all afternoon.

Time and again Rangers came within an ace of a goal, but a combination of near-misses and some brave goalkeeping by Phillips, who recovered from an uncertain start, postponed a victory which had seemed inevitable from the start.

Although players tired and the state of the pitch became worse, the goal, when it came, was unexpectedly artistic. Thomas played the ball between Harris and Droy, Clement ran beautifully on the outside and centred for Bowles to nod the ball home.

Steve Burtenshaw, Rangers’ articulate coach, said later that Bowles had severe ankle bruising, but it was hoped that he would be fit to visit Southampton on Saturday.

“I was delighted we played so well on such a pitch,” he added, “but good players should perform in any conditions.”

After the match fighting broke out among rival supporters, and a retaining wall collapsed behind a goal and injured several spectators.’

The old wall of the Boys Enclosure was replaced with crash barriers and later that month, Rangers went on to beat Birmingham City 2-0 in the next round.