Rangers travelled to Cardiff on 22nd January 1938.. The Acton Gazette provided news of a Football Special from London:

‘In connection with the important Third Division league match between Cardiff City and Queen’s Park Rangers tomorrow, the G.W.R. will issue cheap tickets to Newport,Cardiff, and Ninian Park platform (for the football ground) by a buffet car train leaving Ealing Broadway at 10.45am.’

“Citizen’s” match report appeared in the Western Mail on the following Monday:

‘A dramatic late goal enabled Cardiff City to preserve their unbeaten home record against a better side at Ninian Park on Saturday.

Queen’s Park Rangers will have double reason to remember the terrific shot by Turner which deprived them of a vital promotion point, because it was an exact copy of the goal which he scored against the Rangers at Loftus-road earlier in the season.

Cardiff City, who had played with refreshing enthusiasm, if lacking the polished football of the Rangers, seemed certain to be beaten when, four minutes from the end, they were awarded a free kick well outside the penalty area.

Practically the whole of the Rangers’ team lined themselves in a human wall, and it seemed impossible for Turner to score direct. But the impossible happened. Turner “hit” the ball with rocket-like effect and it was in the back of the net in a flash.

Rangers had played a type of football which was good enough to beat any Third Division side, but in many exciting City rallies the Rangers’ goal had some amazing escapes.

On one occasion Talbot crashed the ball against the crossbar, while with almost the last kick of the match Walton shot through a forest of legs, and it seemed that it was only a miracle which prevented the winning goal.

There was another factor, too, which perhaps entitled Cardiff to “steal” a point. In conception and execution their two goals were worth travelling miles to see, while those obtained by the Rangers resulted from defensive blunders.

Take Walton’s first goal for the City, after 20 minutes. Turner switched over a hard centre which appeared certain to pass beyond the reach of all, but Walton jumped for the ball. And his spectacular effort was so well-timed that the ball left his head as though it had been released by a catapult.

The City retained the lead until a second before the interval, when two of the City half-backs made a hash of a clearance, and Fitzgerald fastening on to a loose ball, scored with a fast cross-shot. 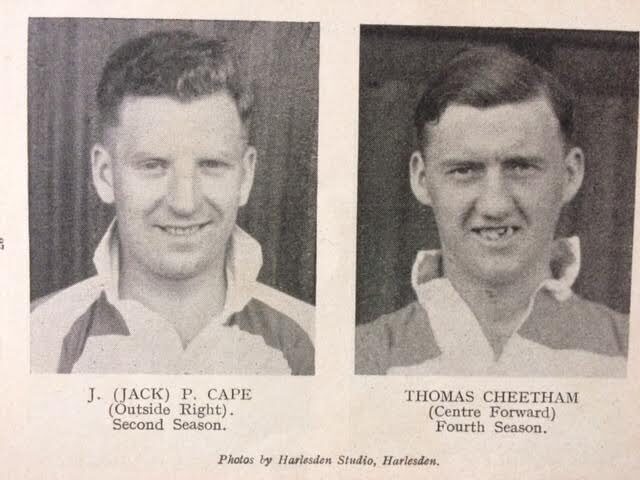 The goal with which the Rangers took the lead early in the second-half also followed a defensive lapse. Ford cleared straight to Cape, but Jones had the shot covered. In flight, however, the ball was deflected by Bassett, and the goalkeeper had no chance.

Then came Turner’s thrilling equalising goal to provide a fitting climax to a magnificent game which was contested at a cracking pace from start to finish.

I thought Rangers showed the better team work. They had a grand centre-half in James, who was the backbone of the defence, whilst the wing-halves not only tackled quickly and strongly, but constantly pushed the ball through for lively and enterprising forwards.

Rangers were more accurate in distribution and developed their attacks on more subtle lines, but rallied by Arthur Granville, the new captain, Cardiff recovered and provided many of the thrills with which the game was crowded.’

The R’s followed this draw with a 3-1 home win over Walsall.

(Shown above are outside-right John Cape and also centre-forward Tommy Cheetham. Thanks to Colin Woodley for his assistance)