On 2nd October 1954 the R’s travelled to Carrow Road. The Eastern Football News, (aka ‘The Pink Un’) reported on the game later that day:

‘Norwich City dropped their third home point in four days when they were held to a 1-1 draw by Queen’s Park Rangers at Carrow Road this afternoon.

Smith gave Rangers the lead 11 minutes after the interval, and it was not until the 74th minute that Hansell forced home an equaliser.

The City forward line showed three changes from that which took the field against Colchester.

Rangers had to make one change from the side announced, Nicholas had a slight strain and his place at right-half was taken by Petchey. Foulkes won the toss and set City to attack the Thorpe end with the sun at their backs.

The first minute brought an attack by Rangers down the right, but the move ended when Smith tried a right-foot shot from an angle that went over the bar and into the crowd.

A free kick to Rangers in midfield followed when Gavin was adjudged to have fouled Powell, and Nethercott had to save from Cameron before City managed to get away. When they did, a long cross by McCrohan found McMillan, but the winger was robbed by Rutter.

A good move in which the ball went right across field from Pickwick to Gordon ended with a centre that Brown punched over the bar, under challenge from Gavin.

Gavin himself was well on the mark a minute later when a long shot from the left-wing that Brown only just managed to touch over for another corner.

It was again Gavin who raced on to a through-pass from McMillan, he just got a foot to it and saw the ball trickle towards goal before Ingham came across to clear.

At the other end, Clark cleared the City crossbar with a header from a good centre by Shepherd, and there followed a spell of Rangers pressure.

Another shot from Gavin, again out on the left, was City’s reply, but Rangers were soon back and after Petchey had brought a grand save from Nethercott, a long throw-in by Angell finished in the City goalmouth, Clark hooking it high and wide as Lewis tackled him.

Brown saved a Foulkes free kick that bounced right through a crowd of players and corners followed to both sides, City’s being forced by Hansell after a fine run.

Just before the interval, came two of City’s best moves so far. In the first Gavin just failed to get control of a ball right in front of Rangers’ goal, and in the second, Hansell flashed in a hard shot that Brown turned brilliantly over the bar for a corner. Half-time: 0-0. 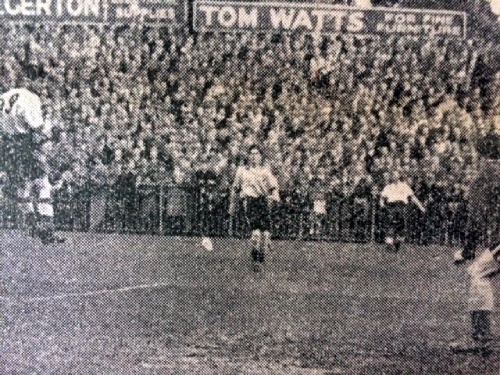 During the interval the Lord Mayor of Norwich spoke to the crowd on the National Savings “news savers” campaign and there was a further interlude by the Drayton British Legion band.

The second-half opened with a City attack in which Gordon centred behind and a shot from Clark that Nethercott took cleanly. Cameron too, tried one from well out and Nethercott flung himself across goal to save.

In the 56th minute the visitors took the lead. Shepherd was given a clear run down the right when he cut in and squared the ball, Smith drove it without hesitation straight into the net.

City immediately made a great effort to put things right again and the referee had a word with Ingham after the full-back had fouled Hansell just outside the penalty area.

Brennan took the kick and Brown just managed to tip it over for a corner. A Rangers defender headed the flag kick behind for another corner, but this time Rangers were able to get the ball clear.

Cameron made a very good effort for Rangers with a run and a lobbed shot that went behind off the crossbar, but then City missed a real sitter. Brennan slipped a perfect ball through to Gordon and the latter with only Brown to beat, shot hopelessly wide.

A minute or so later Rangers came within an ace of a second goal. Clark forced his way in from the right and when he pulled the ball back a shot from Cameron hit an upright and rebounded across goal straight to Morgan, who was able to breast the ball down and clear.

The City goal that had seemed so little like coming materialised however in the 74th minute. Credit for the goal went to Gavin although it was Hansell whose name appeared on the score sheet.

Gavin, back in the middle again, forced his way through the middle, holding off the challenge of Powell and though he was unable to get in a shot the ball went first to Gordon then to Hansell who had only Brown to beat and made no mistake about it.

The goal served to put much more life into the Canaries and they made several strong raids, in one of which Brown again had to turn a shot over the bar.

Against that, however, there was another storming Rangers attack on the City goal and Nethercott made a brilliant save from Smith.

Brennan almost beat Brown to a pass-back by Petchey, and at the City end Nethercott saved again from Cameron, and Foulkes conceded a corner under pressure from Shepherd.

Five minutes from the end a foul on Gavin in midfield gave Lewis the chance to put in another long free kick, but this came to nothing and Brown was there soon after to pluck out of the air a long centre from McCrohan.

The last few minutes were stalemate with neither side being able to make much progress against steady defences.’

At Loftus Road the following Saturday, the R’s drew 2-2 against Southampton.