For most of us, the nine months since we last saw a live match in a stadium have been pretty excruciating. Back in 1945 however, many fans had to wait over six long years.

75 years ago, World War Two had just ended and football fans who had been in the Armed Services were gradually returning home. As a result, the pent-up demand for football was enormous.

On Saturday 17th November 1945, Rangers played Barnet away in the first leg of the FA Cup first round. For the first (and most likely last) time, the competition was played both home and away during this first post-war season.

This two-legged approach was designed to help to boost income for clubs, as the first fully competitive season of league football was still over eight months away. 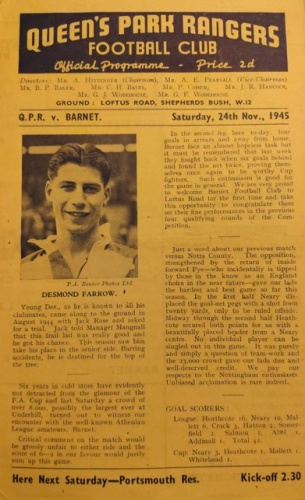 The match played at Underhill was Rangers’ first FA Cup tie since losing 2-1 at home to West Ham United in the 3rd round on the 7th January 1939.  A very long wait. Portsmouth had eventually won the FA Cup that season, beating Wolves 4-1 in the final. Little did they know it at the time, but Portsmouth would hold the trophy for the next six years.

During that time, the trophy moved around the Portsmouth area, in addition to being stored in the club’s safe at Fratton Park, it spent time in Havant Police station, a branch of the National Provincial Bank, the cold store of a meat packing business, under the bed of Portsmouth manager Jack Tinn……and at various pubs in the Portsmouth locality!

Despite a few close shaves in an area that was heavily bombed, the trophy survived the war to be returned safe and sound to the FA in time for the 1945/46 competition. 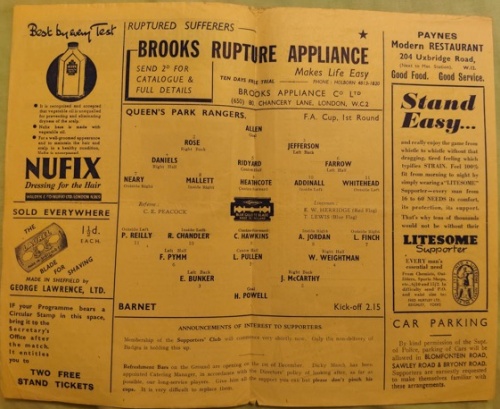 For Barnet, this match was their first FA Cup tie in just two weeks, when they had beaten Ilford 5-2 in the 4th qualifying round. They had started the competition in the preliminary round on 8th September, when they beat Edgware Town 4-1 away and they subsequently put fellow London non-league sides Tufnell Park, Enfield and Wealdstone all out of the cup.

Rangers won the first round, first leg match emphatically; 6-2 after being 6-0 in front against the Athenian League amateur side. This result was followed by a far narrower 2-1 at Loftus Road the following Saturday. 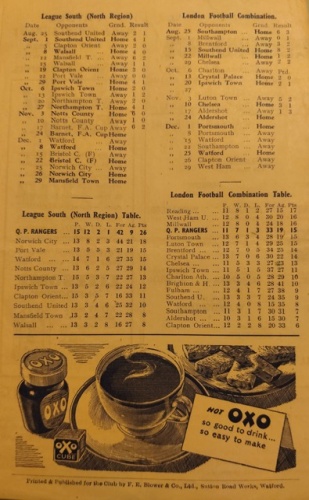 In the programme for the home match, a very interesting two-page insert was included entitled “Looking Ahead” that summarised the club’s exciting plans for the coming years – most of which were subsequently achieved. 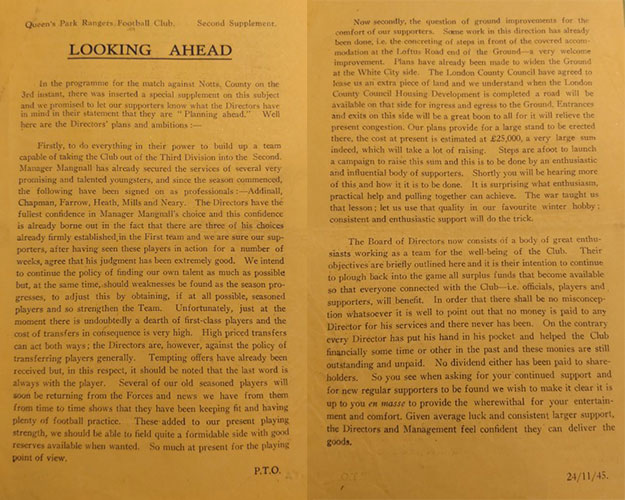 At the match at Barnet was my father, Frank Percival, attending his first Rangers match since docking at Liverpool at the end of October on board a troopship. This was after a three-week voyage from Rangoon, Burma.

He had been based in Rangoon since being flown out of another camp in Burma on 1st September onboard a Douglas Dakota. This was after 3.5 years as a prisoner of war, spent working mainly on the Thai-Burma Railway.

It had been a tough home-coming. His stepmother met him on the doorstep at home in Willesden to tell him that his father, also a life-long Rangers fan, had died over a year previously. None of the letters with this news had reached him in the Far East.

When he said he was going upstairs to his room, his stepmother warned him that most of his possessions were gone. During the War, she and her husband had both served with the Willesden ARP (Air Raid Precaution) as wardens.

With the North-West London area being heavily bombed, families were encouraged to dispose of anything flammable. So, all my Dad’s programmes, handbooks and scrapbooks that he had kept since he was 7 years old were all gone. He had attended his first match at Loftus Road with his Dad and Uncle in 1926.

When I discovered the box of his programmes from 1945 onwards in the summer of 1974, I was enthralled. He then told me stories associated with the various matches that he had attended, in addition to the Barnet match, when he arrived home in 1945.