The following article appeared in the Cornish & Devon Post on 24th September 1904:

‘A serious collision occurred in Shepherd’s Bush on Friday between a motor-car and two electric cars, resulting in severe injuries to three men.

It appears that the motor-car, which was a heavy one, was being driven down Goldhawk Road by Mr Gracey, jun., the son of the owner of the car. Mr James Gracey, of Harlesden, who, with Mr Albert Whaile, of Alperton, Wembley, was also in the car.

When near Stephen’s Avenue the driver endeavoured to pass an electric car going in the same direction. He made for the offside of the car and had barely passed it when another tramcar came from the opposite direction.

All three vehicles were travelling at a good pace and before either of them could stop the motor-car was crushed between the two trams and practically smashed to pieces. 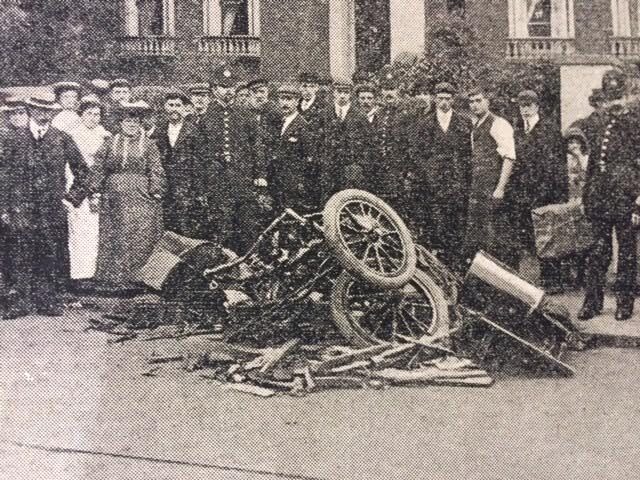 The sides of the trams were also badly damaged. All the occupants of the motor-car were thrown out. As soon as possible the tramway officials, with the assistance of some of the passengers, extricated the unfortunate men.

It was found that they were all badly injured. Medical aid was summoned, and in the meantime Mr Whaile, who was in a state of semi-consciousness, was taken to the West London Hospital, where he was found to be in a critical condition.

Mr Gracey and his son were seen by a doctor and removed to their home in a cab.

The accident caused considerable delay to traffic on the tramway system between Shepherd’s Bush, Kew and Hounslow.’

It was reported elsewhere that Mr Isaac Whaile was making favourable progress.

(Thanks to Colin Woodley for his assistance. The image isfrom my collection)

One thought on “The Motor-Car Smash in the Goldhawk Road, Shepherd’s Bush in 1904”