Rangers took on First Vienna at the White City on Monday, 30th January 1933. Ahead of the match the Daily Herald’s preview appeared on the previous Thursday:

‘There has already been a good demand for tickets for the game between Queen’s Park Rangers and First Vienna Club of Austria, which takes place at the White City Stadium on Monday next, kick-off 3pm.

It will be the first appearance of this leading Austrian club in London, and ten internationals will be included in the visiting side. They are at present leaders of the Austrian League and have lost only two games.

They won the championship of the Austrian League in 1930-31 together with the Central European Cup.

Ordinary League prices will be charged, with numbered and reserved seats at 3s 6d, which can be had on application to the Rangers’ secretary at Ellerslie-road, Shepherd’s Bush, W12.

The Vienna team arrive at Victoria today at 3.30pm and will be met by officials of both the Queen’s Park Rangers and Plymouth Argyle clubs. They meet the Argyle at Plymouth on Saturday.

The game is being eagerly awaited in Devon where many clubs have postponed their games in order that their players and supporters can be present.’

A report appeared in the Nottingham Journal the day after the match:

‘First Vienna, the Austrian tourists, opposed Queen’s Park Rangers at the White City yesterday without Schmans, who had contracted influenza.

Vienna were aggressive early on, and after Beecham had saved well on two occasions, Adelbrecht beat him from close range in the 17th minute.

Horseschofsky made a brilliant save from Wiles, and later Blackman caused him trouble with two shots in an angle, one of which he dropped over the bar.

Vienna re-opened with a burst and after Blackman had run down and shot across the goal, they went further ahead. Brosenbauer took the ball to within six yards of goal and crossed it. Two men missed, but Schonwetter shot inside the post.

The Vienna centre-forward left the field and a substitute came out. Another Vienna attack saw Wortman beat Beecham with a good shot to put the visitors three up.

Rounce missed from an easy position and later struck the crossbar with a fierce drive.’ 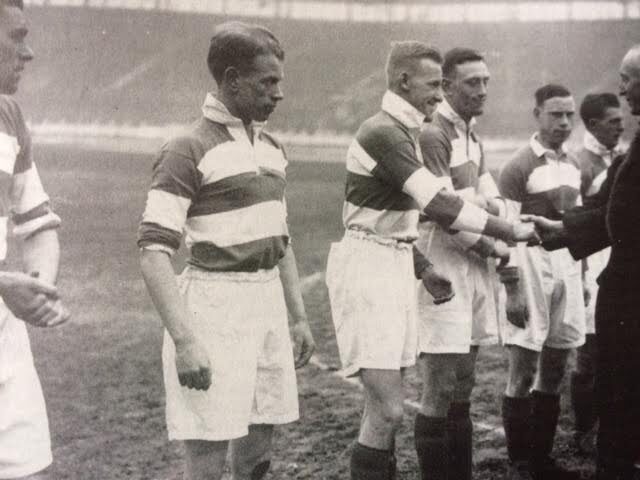 ‘But for the extremely bad state of the ground, the Rangers would undoubtedly have sustained a heavier defeat than was the case when First Vienna beat them 3-0 at the White City on Saturday.

The Vienna club found it extremely difficult to get going properly on the heavy pitch, and as the game progressed and the mud became churned up, matters became even worse.

Many of their brilliant moves and highly skilled passes went astray for the simple reason that the ball seldom did what the players were expecting it to do. Often it stopped practically dead on striking the ground, and light touches only served to carry it a yard or so.

Nevertheless, First Vienna completely outplayed the Rangers, and on a firm, dry ground the match would have been hopelessly one-sided.

One of the most delightful features of the visitors’ play was the perfect understanding which seemed to exist between them. No matter what move was made, it always seemed as if the team were expecting it to happen. It was blackboard football put into practice – in spite of the efforts of the opposing players.

Most of the First Vienna team are not professionals in the strict sense of the word, as football is only a side-line with them. In view of this fact it seems remarkable that their game should be so highly scientific and reach such high standards.

Their weakest point on Monday – and weakest is rather a strong way of describing it – was in defence. The backs in particular never advanced solidly enough to prevent attacks gaining a strong position, but played a retreating game, which was in favour of the home forwards.

However, the Rangers’ finishing was not good enough to result in goals.’

The R’s went on to draw 2-2 at Vicarage Road the following Saturday.

(The above pic shows an Austrian government minister meeting the Rangers players prior to kick-off. Thanks to Colin Woodley and Dennis Samuels for their assistance)