‘Dicky’ March arrived at Queen’s Park Rangers in 1931 from Crawcrook Albion and made his first team debut the following year on Christmas Eve against Torquay.

The ‘Ranger’s Notes’ in the Fulham reserve programme dated 17th April 1937 announced that: ‘Thursday next is Dicky March’s BIG DAY (against Brentford). For five-and-a-half years he has looked forward to “Der Tag”.

Enough ink has been spilt in eulogising Dicky in this column that it is unnecessary to add more now. Suffice to say that it is hoped that this reminder will not be in vain and that you personally will be present for the double purpose of paying homage to a great sportsman and witnessing an assuredly attractive game.

An added and great attraction will be the presence of Mr Reg Rudd who will take charge of the game. Mr Rudd has just paid him the greatest compliment that the parent body can pay a referee by inviting him to referee the Cup Final a fortnight hence….’

There were also details in the Supporters Club notes of a forthcoming ‘Gala Dance’ at the Harrow Road Drill Hall, (close to Royal Oak Station). Dancing to the Rhythm Aces, tickets were priced at 1/6 and obtainable from Mr M. W. Steptoe, 11, Lothrop Street, Queen’s Park, W10.

The match against Brentford on 22nd April kicked off at 6.15pm. According to the match programme the R’s team wasas follows: Mason, Barrie, Vincent, March, Farmer, Moralee, Bott, Cameron, Lowe, Fitzgerald, McMahon. However, there was at least one change to that line-up, as Tommy Cheethamscored one of the Rangers goals. 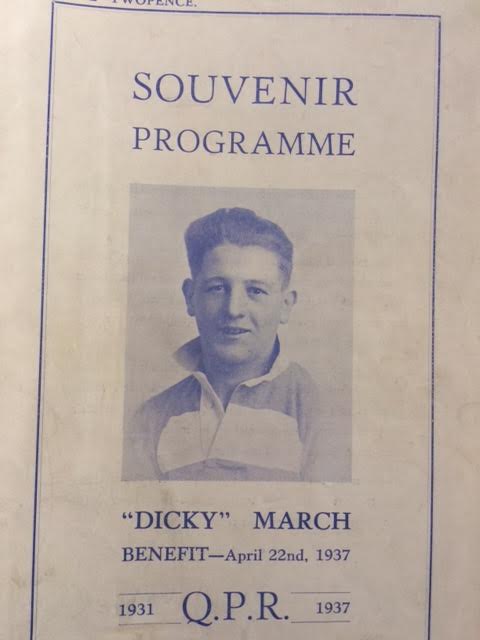 Two days later the Middlesex County Times reported that: “About 7,000 people saw Queen’s Park Rangers beat Brentford 5-2 in a match for the benefit of Richard March, the Rangers’ left-half, at Shepherd’s Bush on Thursday evening.

Lowe (2), Cheetham, Fitzgerald and McMahon scored for the Rangers and Scott got Brentford’s two. The match was refereed by Mr R. Rudd, the Cup Final referee.’

Later, ‘Rangers’ Notes’ in the Palace match programme on 1stMay, revealed that: ‘Dicky March as a result of various efforts on his behalf last week is the richer by a total sum of approximately £275 (worth over £18,000 today). From every point of view, in the circumstance, this must be considered a most satisfactory figure and no doubt the player is well satisfied and refortified with that desire for service to the Club and all that the Club means.’

After hanging up his boots in 1942, Dicky became the Club’s Catering Manager.

(Thanks to Colin Woodley for his assistance. The various match programmes are from my collection)