Ahead of a new season, the following article titled: ‘Bushranger Finds New Faces and Confidence at Loftus Road’, appeared in the Middlesex County Times on 22ndAugust 1936:

‘There is an atmosphere of quiet confidence down at the Queen’s Park Rangers’ ground in Loftus Road.

I looked in one morning this week (writes “Bushranger”) and found the “boys” doing a few “limbering-up” exercises under the watchful eye of trainer Richards.

They look, all of them, “in the pink” – thanks to Richards and his assistant Jimmy Eggleton, who got them together at the end of the close season a few weeks ago, without any fuss and settled down to a routine of simple, direct exercises.

Tom Cheetham was banging a ball about as cheerfully as ever, swinging it goalwards with the same careless efficiency. It was good too, to see Jack Crawford, that troublesome limp happily gone, speeding down the wing.

The Rangers look a bigger side this season. Perhaps they learned a lesson from having their slightly-built inside-forwards badly knocked about last season. At any rate, their new men, those that I saw, are a hefty lot.

It says much for the Rangers’ manager, Bill Birrell, that the club has retained seventeen of last year’s men. This, I believe, is the largest number ever to be retained by the Rangers.

I happen to know that the good feeling that was immediately established between the newly-appointed manager and the many strangers in his charge did much to help the team through the anxious first weeks of last season. 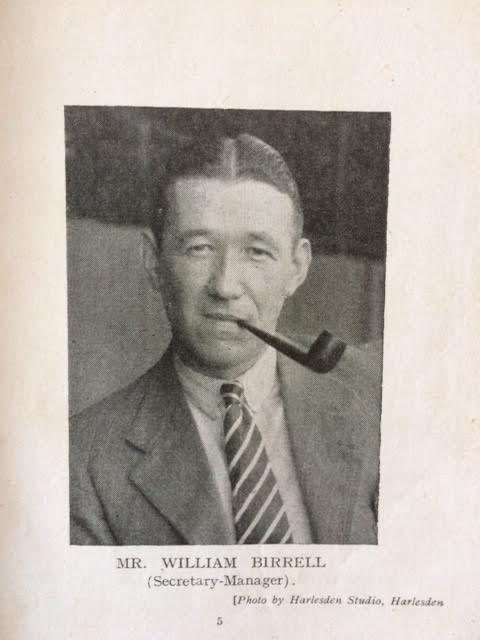 Mr Birrell, as usual, was reticent on the subject of his new acquisitions, but he seems satisfied with them all, and more than satisfied with two in particular. There are ten of them altogether.

Youngest is Jim Mason, a nineteen-year-old Scot, whom Mr Birrell discovered late last season while playing in Scottish junior football. A six-footer and weighing twelve stone, Mason should make an admirable deputy for his namesake, C. Mason, in goal.

W. Moralee, a wing-half from Bournemouth, is, according to Mr Birrell, “a good solid player of the terrier type”.

Fitzgerald, already known as “Paddy”, is another wing-half from Reading, and hails from Rotherham, that nursery of football genius.

W. Bott is probably the Rangers’ luckiest acquisition. A left-winger with a kick like a pile-driver, he was transferred from Huddersfield, where he made 37 first-team appearances in one and a half seasons. Bott should fill adequately what was the weakest spot in last season’s attack.

Hugh McMahon, a speedy winger equally at home on either wing, has seen service with Reading and Southend.

W. Royan, who will understudy Cheetham at centre-forward,is another Scottish junior signed by Heart of Midlothian last season and another hefty youngster.

K. Cameron is an inside-forward with experience of First and Second Division football.

The only amateur on the club’s register is W. Charlton, the Wimbledon and Corinthian player, who was three times chosen for international trials last season. Charlton, a clever forward, equally good in the centre or in a inside berth, has had League experience with Hull and Southampton.

Here is material for two good teams, but Mr Birrell is going a step further. Years ago, the Rangers had a reputation for recognising and fostering local talent. On Thursday evening,two teams of local boys gave an exhibition on the ground.

From among those eager youngsters there may be another George Goddard or Arthur Chandler, who may make his debut one Saturday afternoon.

It is difficult to draw Bill Birrell out of his native caution. There is never a sign of ebullient enthusiasm in the manager’s office at Loftus Road, but what he did say to me was this:

“I feel that we have made an attempt to obviate the short-comings of last season. If we can give a good account of ourselves during September, when we are five times away from home in eight matches, we should have something in hand.”

“And then – if the ball runs kindly for us we ought to be in at the death.” And that from Bill Birrell, is almost an oration.’

The R’s went on to finish ninth in the Division Three (South) League table.

(Thanks to Colin Woodley for his assistance. The above pic of Billy Birrell was taken from the Club Handbook)