The following article is from the Hammersmith & Shepherd’s Bush Gazette and appeared in John Brunel’s ‘Diary’ on 17th February 1966:

‘Take a group of good musicians, an original sound and a good song and you can’t go wrong. You’ve got a hit record!

The name of the group is “Jimmy Winston’s Reflections,” the name of the song is “You Ought to be Ashamed,” and the name of the boy who could get it to that number one spot is Johnny Weider. For Johnny, the group’s lead guitarist puts them in a class above most other new groups.

He taught himself the guitar at 13 and left the Christopher Wren School, Shepherd’s Bush, to go straight into the world of pop.

Said Johnny, who comes from Ashchurch Terrace, Shepherd’s Bush: “It was a choice between playing violin with the National Youth Orchestra or playing the guitar in a pop group. I chose the pop world because there was more money in it and a bigger future.”

Johnny, who is 19 in April, loves classical music. He started learning the violin at the Royal College of Music at the age of seven. He passed all his exams and had left the college by the time he was 12.

At 14 he played with a group called “The Canons,” at 15 he played with the “Laurie Jay Combo” and at 16 he was playing the lead guitar with Jet Harris and Tony Meehan.

“I was with them when they recorded “Diamonds,” he said. And it was Johnny’s sixteenth birthday that his father, who has always encouraged him, presented him with a £500 guitar.

“But even now I only use it to practice on. I wouldn’t use it on stage unless I was earning the money to go with it,” he said, showing me the elaborate gold-plated instrument.

He later joined a group called the “Wild Ones,” and at 17 signed up with “Johnny Kidd & the Pirates.”

Johnny put a disc on the record player called “This Golden Ring.” It sounded vaguely familiar and then he explained: “I recorded this about six months ago with “Johnny Kidd & the Pirates”, but he didn’t think it was good enough to release so we didn’t release it. And now “The Fortunes” have recorded it and everybody is saying it will be a smash hit.

Johnny has toured Belgium, France, Germany, Ireland and Sweden as one of Johnny Kidd’s Pirates and has been on the bill with “The Fortunes” and ‘’The Kinks.”

But said Johnny: “I felt I wanted to start afresh with a new, young, Mod group. So I gave it all up to join “Jimmy Winston’s Reflections”, that’s how sure I am of our success. The group was formed three weeks ago and we have been practising furiously every day. We have got quite an original sound – we call it Pop Jazz.”

Johnny, himself, is nicknamed “Backbone” because his favourite is B. B. King. Nobody knows what the initials stand for and the group substitutes “Backbone.”

Johnny’s main hobby is clothes. He spends most of his spare time in Carnaby Street trying out all the latest Mod gear and is a great friend of John Stevens, who more or less owns the street.

But the group’s road manager, Gerry Harris, nicknamed “Shortie,” has persuaded them to take up karate as a hobby. But I suspect it’s to ward off all those screaming female fans when they hear the boys’ record.’ 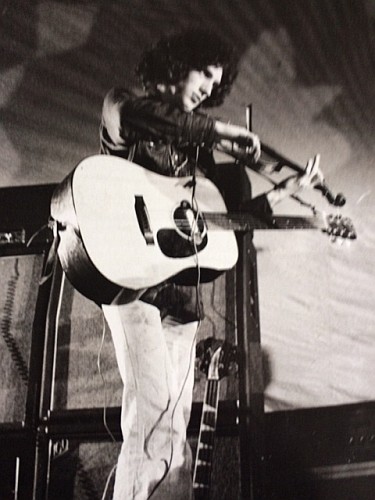 Apparently most of his recent product is more closely associated with New Age music.

I must mention his appearance at Loftus Road in February 1964 with the Moments. The following note appeared at the back of the Hibernian programme:

‘Other new faces at Loftus Road are Steve Marriott and his Moments. This is the first time we have had a beat group in action before a match and would like to wish Steve – who has appeared on several TV programmes – a swinging time.’

I wonder if Johnny is/was an R’s fan?

(Thanks to Colin Woodley for forwarding me the newspaper article)