‘Wednesday’s narrow victory over Queen’s Park Rangers, bottom club in the Second Division, kept them well in the promotion race, but it was not a convincing victory. It was probably the most disappointing match of the season at Hillsboro’, where the attendance was 41,706.

Bannister won the toss and Wednesday started the game against the sun although they had the slight wind behind them.

The Rangers, bottom of the League set off as though they were on their toes and meant to improve their position, and Wednesday had one or two uncomfortable moments early on. First Smith shot over the bar and then McIntosh had to deal with a really good shot from Muir. He turned the ball round the post for a corner.

Muir won a corner off Curtis and when this was taken, the ball was headed over to Waugh, who shot a little too high. Hold then had a shooting opportunity when Waugh and Smith had passed the ball inside, but he was off the mark.

Curtis put a free kick into Rangers’ goalmouth and as the ball bounced the backs were inclined to leave it to Brown: while they were doing so Dooley nipped in and hooked it over the bar.

After 32 minutes, Wednesday took the lead and it was a well-headed goal by Sewell that gave them their advantage.

Spence was penalised for pushing just outside the penalty area; Witcomb lifted the ball over to the right of the goal; Sewell ran in some yards while the Rangers were still in the positions they had taken up and headed into the corner of the goal.

The referee had a word with Spence when he bowled Dooley over somewhat unceremoniously on the far touch line. Both players fell in a heap with their arms and legs flying about.

Some of the football continued to be a bit scrappy up to the interval and Dooley followed Spence across the field and made the Rangers’ captain kick into touch. Dooley threw the ball in himself and a shot by Sewell went across the goal.

So far Banister had put in some good work in the defence and when he dropped the ball into the goalmouth Dooley collided with Brown and came off worse. He was winded and had to have Sam Powell over to him.
Half-time: Sheffield Wednesday (1) – Queen’s Park Rangers (0). 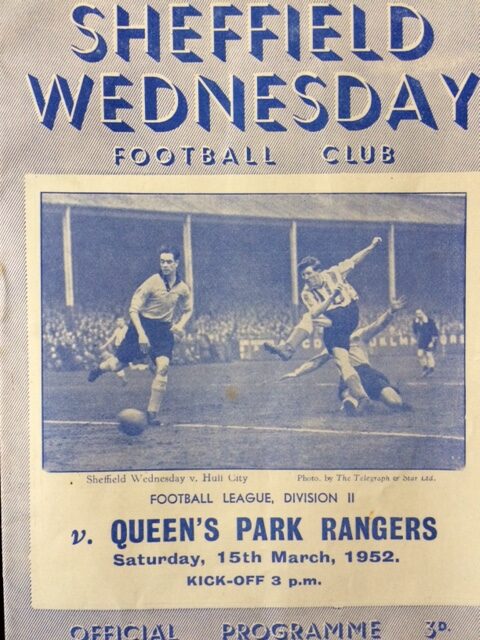 Sewell was damaged right at the beginning of the second-half, but when he recovered, he almost increased the Wednesday lead.

First of all he headed over Ingham’s head and then shot in. It seemed that the ball struck Brown. More than that, Brown saved, for the goalkeeper frankly did not know a great deal about it.

McIntosh came out of his goal once at the right moment to deal with a centre from Muir, and when he cleared Wednesday went straight down and added to their lead after 61 minutes.

Finney put the ball forward and Sewell, once more showed how dangerous he can be with that short, sharp spurt of his. He was through the defence and finished with a shot, which did not give Brown a chance.

Sewell then went close to getting his hat trick. He passed a ball to Dooley, and when it came back to him, he shot and Brown put the ball round the post for a corner kick.

At the end of 75 minutes, Rangers got a goal. It was remarkable in a way because at least three players tried to take a wild shot and missed the ball, until finally Muir put it through.

Brown, the Rangers’ goalkeeper, took a free kick for offside just over the halfway line. He dropped the ball into the goalmouth and Gilbert shot into McIntosh’s hands.

It was touch and go once or twice whether the Wednesday goal fell. As a matter of fact the Rangers crowded round the referee appealing for a penalty presumably for hands when Curtis was on the floor, but after consulting the linesman he gave Wednesday a goal-kick.’

Making his debut for Wednesday at No.11 that afternoon was Colin Whitaker, who was to sign for the R’s nine years later.

Reflecting on the hopes for both clubs, the programme notes stated: ‘Those are results which suggest that if the Rangers keep a stiff upper lip they may yet escape from the vortex, though we cannot afford to be charitable to them today, for we need the points at issue just as much as they do, seeing we seek promotion.’

The Owls went on to finish the season as Champions, whilst for the Rangers it was relegation to the old Division Three South.