Mike played 77 games for the R’s and scored 3 goals. He was mainly a traditional left-wing player from the old school who liked to hug the touchline. He was very talented with great ball skills and vision.

The best game I ever saw Mike play was in the 5th round FA Cup tie at Loftus Road on 7th February 1970 when QPR beat Brian Clough’s First Division high flyers Derby County 1-0.

Mike seemed to mesmerise the Derby defenders that afternoon and in partnership with Rodney Marsh, caused havoc upfront.

Last season Mike was included in the ‘Forever R’s Club’ and whilst at the ground for his induction, paid a warm tribute to QPR FC.

Rest in Peace Mike Ferguson. You did Rangers proud. 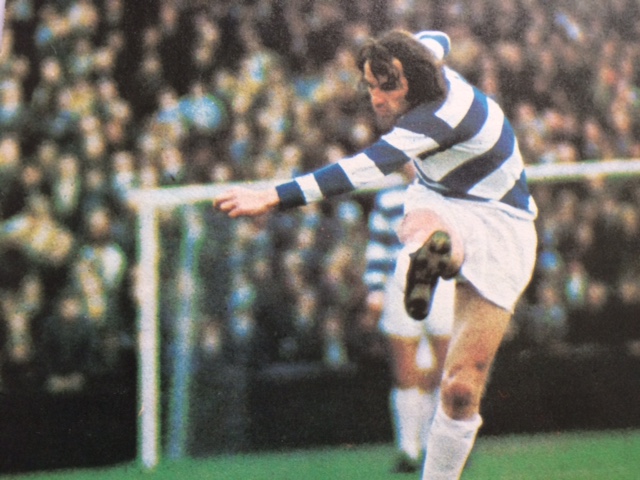 ‘There is an undefinable quality about a player’s personality that makes him a ‘character’ and favourite of the crowd. Fred Callaghan has it at Fulham, Harry Cripps at Millwall. It is a quality possessed too by Mike Ferguson.

Ferguson came to Rangers from Aston Villa for a bargain of £11,000 (?). He played his first game almost exactly a year ago on November 22nd against Leicester City.

Now he ranks as a favourite alongside Rodney Marsh at Loftus Road, which is really because he has an uncanny way of reading Rodney’s game.

As he says: “I think Rodney is fantastic to play with. It took a bit of getting used to reading him because he does things that aren’t in the textbook. I think he gets so much knocking when he loses the ball after trying to beat three or four men.”

“To me he can do it all the time as long as he puts the ball in the net and the tenth time, that’s what he does. When I get round the penalty box I’m always looking for him if I can’t get a shot in. He’s brave, he doesn’t mind if players are around him. This is why he is such a good player, and he thinks very quickly as well.”

Although he has only been here a year Fergie seems to have been an ever present. He never misses watching a Rangers game, be it reserves or juniors and the other week he even turned up on the terracing at Wealdstone to watch your correspondent playing for the Radio One X1.

He also feels he has played more football this season than most of the playing staff because he has turned out for the reserves five times in mid-week as well as the first team on a Saturday. Why does he watch so much football when he plays so much himself?

“I’m just interested in football. I remember when I was at Blackburn I’d been a regular for five seasons in the First Division and went over to watch Halifax play Newport County in the Fourth Division. It was one and a half hour journey from where I lived and it was a night match.”

“I saw this bloke Archie Taylor playing on the right-wing for Halifax and I went to Blackburn and recommended him. The manager couldn’t believe I’d recommend someone else for my own position at outside-right. But I just thought Taylor was a good player worth having in the club.”

Fergie still has a Northern accent reflecting Lancashire where he spent most of his playing days with first Accrington and then Blackburn before moving to Villa, where he was, it can be delightfully recalled, one of Tommy Docherty’s cast-offs.

With the accent goes a pleasantly sardonic sense of humour. I think it is style of play that has endeared him to Rangers fans. We have always admired football skill rather than sheer brawn.

Of the Loftus Road crowd he comments: “I think the crowd have been good to me. People say to me that they can be a fickle crowd, but I think they are biased towards their own team. Personally as a player that’s a fine thing. We don’t want them cheering the other team.”

“When you hear people say they are a bad crowd they should go up North to places like Blackburn. Up there you get abused even when you’re out with your wife.”

“There’s a lot more to do in London. They think about football down here, but they don’t just let football play on their minds like up North. I like London. I do very much.”

His football career started with Plymouth Argyle. He moved on to Accrington Stanley in 1960.

Rangers signed him from Aston Villa in November 1969 for a fee reported as £20,000? Mike made his debut later that month at Loftus Road on 22nd November against Leicester City.

He went on to make 77 appearances for the R’s. The first of his three goals was in the home FA Cup tie against South Shields.

In July 1973 Mike departed to Cambridge United on a free transfer.

He managed Rochdale before moving to the USA to take on the Los Angeles Aztecs. Later, Mike took up the reins at clubs in Iceland and Cyprus.

We did get to see Mike one last time when he was inducted into the ‘Forever R’s’ last season.

One thought on “In Memory of Mike Ferguson”