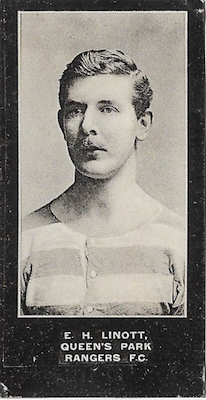 Also included in the series were six Manchester United players, five from Everton and four from Glasgow Rangers.

Evelyn Lintott was signed from Plymouth Argyle in 1907 and he made his debut later that year against New Brompton.

Lintott made a total of 7 full England appearances. Tragically he was killed on the first day of the Battle of the Somme after leading his platoon of the 15th West Yorkshire Regiment, ‘The Leeds Pals’, over the top.