A couple of years ago, my friend John Smith tweeted out a passage from Kevin Drinkell’s autobiography (you remember him: Norwich, Cov, Rangers…Grimsby).

He made a point that Drinks book was not a riveting page-turner – but there was this one bit that made his mouth drop open. In the passage, Drinks describes a fancy dress Christmas party while at Norwich.

The usual costumes are present – Drinks himself went for the uber-conservative of going as a snooker player. But one player was different: amidst the Batmans, the chefs and the Draculas, Dale Gordon went as…a tampon. Yes he did.

He handcrafted the whole thing himself, apparently. He painted his face white and added strategic red colouring to his white clothing and everything. Incredible work.

This revelation led John to wonder whether there was a book idea based on this kind of thing: a sort of massive compendium of the most extraordinary things to be found in the autobiographies of footballers.

After all, while any football fan surely reads his or her of football memoirs over the course of their lives, no one can read them all – or would want to, so it stands to reason we’re all missing out on some incredible tales.

Think about it. While most of us lot have probably read Rodney Marsh’s book (entitled, ‘I Was Born a Loose Cannon’ – an opinion of himself he’s so desperate to nail that he reminds us of it over 40 times during the actual book (even if, actually, and don’t ever tell him this, he doesn’t seem that loose. Not really).

How many QPR fans would read former Wigan and Rangers midfielder Lee McCulloch’s book? Much less, say, Kerry Dixon’s? (I drew the line at reading the latter, obviously: John had to do that one). We felt sure that within all these books there would be gold to be found. Somewhere.

Two years on and ‘Booked! The Gospel According to our Football Heroes’ has just been published and we hope that our hunch was right. We read about 130 autobiographies, covering as many clubs as we could, and squeezed out the nest, worst, weirdest and most disturbing stories, facts, and opinions we could find.

It’s broken into themed chapters, such as banter (seriously, there is so much banter in these books, we could do without ever banting about any banter for the rest of our banters); referees (many of them, it turns out, hate each other as much as we hate them. Gang warfare almost broke out between them in the noughties, especially after someone grassed up Graham Poll for drunken behaviour on a ref’s get-together); crime (everything from drink driving, to ‘accidentally’ stealing a small adaptor for a hosepipe from B&Q, to running a knocking shop); and sex. Oh yeah – the old sex. 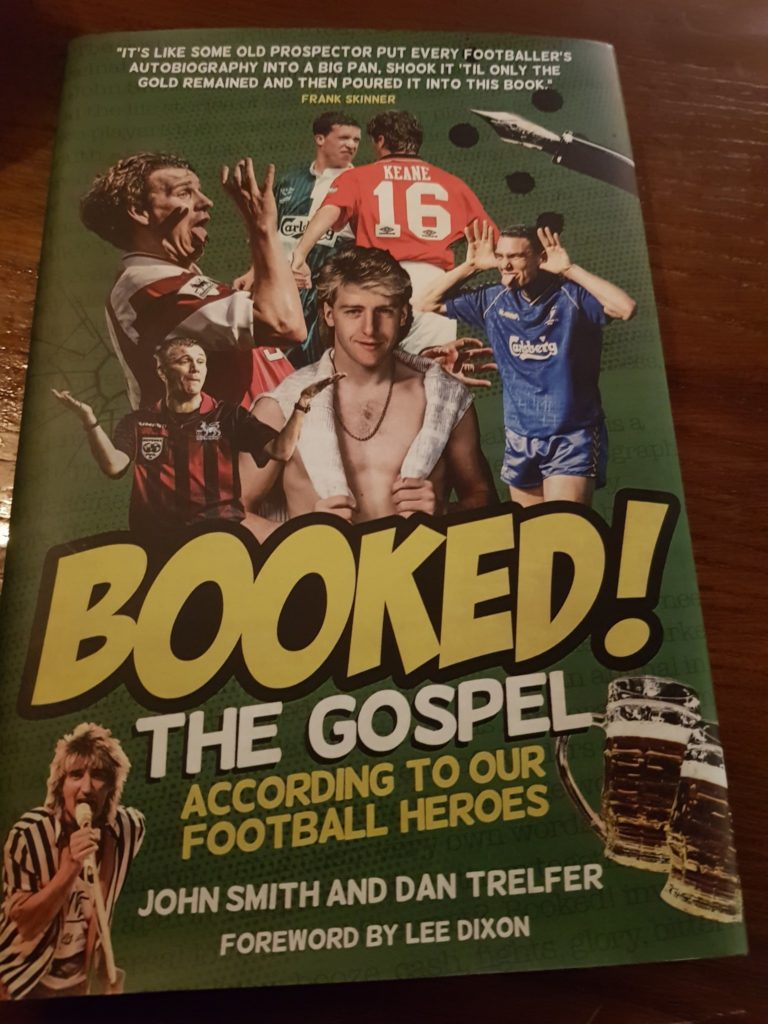 Some footballers absolutely love telling us all about the tons of sex they’ve had, often in quite unnecessary detail.

Mick Quinn’s book is an entertaining read in many ways, but he forced the image of his naked self, making the beast with two backs into my head so many times during his memoirs that I needed counselling by the end of it.

Anyway, we think what we have is a book that makes a great read with hopefully a lot of laughs that will definitely take your mind off the horrors that seem to await us at LR this season. But we also think it gives a more rounded picture of the life of a footballer.

Because, amazingly, whether he played in the 1960s or the 2010s, certain things seem to remain pretty similar in the experience of the average footballer – although, as far as we know, only one ex-pro has a tattoo drawn by Hollywood actor Mickey Rourke.

Before I leave you with an obtrusive link to the book (which I hope you will all buy not only for yourselves but also for everyone you know) shall we have a quick quiz?

Three of our favourite quotes that we found, along with a multiple choice as to who wrote them. Answers at the end.

Come on you Rs!

‘Windsor was also full of gays. It was quite a well-known thing that young soldiers would go off with businessmen and suchlike, and we used to exploit this to a degree that was criminal at times. We used to go to a certain pub where they would buy you drinks all night. They would become very friendly at closing time, but we’d just say, “well thanks very much, see you now,” and walk off.’

‘We had the music going as usual. Les Ferdinand’s tapes were a big hit. Les certainly knows where it’s at musically; Incey and I were watching him dancing as he was getting changed. He couldn’t help it. It was great to watch.’

‘When I arrived, I was taken to a palace in Baghdad and given an amazing room. I only stayed the one night there, which was a pity, because it was old and ornate and obviously had a lot of history.’

‘The next day I was taken to another building and formally introduced to Uday, and even though I only spoke with him for 10 or 15 minutes, he had immaculate English and came across as a nice guy. He didn’t seem cruel at all, although I know that you can’t judge someone by a brief meeting and I’m now aware of what he was capable of and his reputation as a butcher.’

‘I would have loved to have met Saddam as well, but funnily enough he was keeping a low profile at the time!’

One thought on “Booked! The Gospel According to our Football Heroes – Dan Trelfer & John Smith”