‘Having made Notts County gallop all the way on Thursday, Mansfield did not face Queen’s Park Rangers without hope of winning on Saturday, despite the disadvantage of playing on their opponents ground.

Speed was still in the attacking line with Bungay at left-fullback, his injured leg being apparently suite sound. Horne was at inside-right with Fielding on the wing, and Holmes was brought in again on the opposite wing as partner to Speed.

There was a fairly good crowd, the figures being returned at 14,000, and among those present were two well-known American boxers, Al Roth and Al Delaney.

Both sides showed smartness in the opening stages but the Rangers came near to scoring.

Hughes being alert to save a header by Prior, the home centre, who got his “napper” to a capital right-wing centre, but Mansfield soon retaliated and within five minutes they had taken the lead, and a capital goal it was too.

It was from a breakaway that Mansfield opened their account. Barke slipped a smart pass up the middle to Crawshaw, who dashed forward with the ball and from the edge of the penalty area let fly for goal.

There was some power behind the effort, for although the home goalie got his hands to the ball, he could not hold it and Town were one up in five minutes.

This was a grand start for the visitors, but it roused the Queen’s to re-double their efforts and it was only sound work by Hughes that prevented them drawing level.

Later the Mansfield goalkeeper punched away a good shot from Cape. Mansfield, however, had their share of attacking and they were extremely unfortunate to see a great effort by Barke strike the crossbar and rebound clear.

After Hughes had again distinguished himself with a fine save, the Rangers might have drawn level but for their own weakness when in the scoring area.

Both sides attacked in turn, but by this time the visitors had settled down and were showing the most impressive football, but Jefferson gave the Mansfield custodian a teaser to deal with and his save elicited applause.

Crawshaw and Holmes combined prettily and, interchanging positions, thoroughly upset the home defence and narrowly missed to put them further behind.

Mansfield at this period was playing fine football and deserved to go further ahead, being only just checked in time.

The Londoners might have drawn level from a free kick on the penalty line, but Hughes was again in evidence and Mansfield thoroughly deserved their interval lead.

The way the Rangers resumed gave one the impression that they had been talked to in the interim. They went about their work in a real bustling fashion and forced a fruitless corner.

Hughes again came into the picture and was cheered for another great save, and, following this, the Town took up the attack with vigour, and so the game went from end to end.

Generally, the visitors had the better of the midfield play and they were faster on the ball than their opponents, and the centre-forward was doing some excellent work to keep his line going.

Although the Rangers were in the Town half frequently, their attack was not sustained and was ragged.

At this period Mansfield looked certain winners, but five minutes before the end, against the run of play, the home side (Bott) scrambled the ball into the net.’

It states in the post match comments that had Rangers secured both points they would have been top of the table. 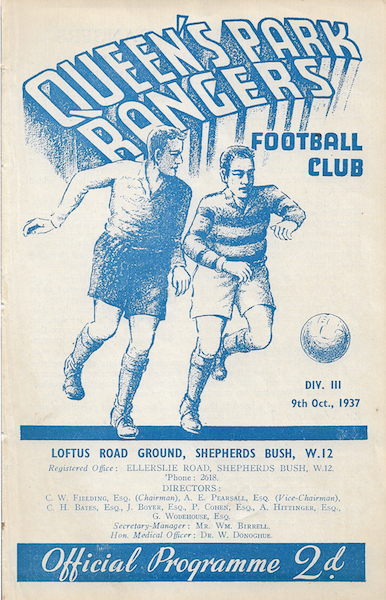 The Supporters Club notes gave notice of the forthcoming dance at the Harrow Road Drill Hall (two minutes from Royal Oak Station). Dancing from 7.45 to 11.45pm to the Rhythm Aces Band.

The Penny-on-the-Ball 1st prize was won by Mr Kempton of Ledburg Road, Bayswater.

The following week the R’s lost 1-0 at Reading.

(Thanks to Colin Woodley for finding the match report. The programme is from my collection)