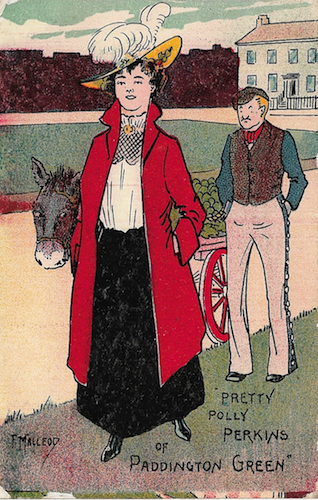 ‘I am a broken-hearted milkman, in grief I’m arrayed,
Through keeping of the company of a young servant maid,
Who lived on board and wages, the house to keep clean,
In a Gentleman’s family near Paddington Green.

She was as beautiful as a butterfly and proud as a Queen,
Was pretty little Polly Perkins of Paddington Green,

When I’d rattle in the morning and cry “Milk below”,
At the sound of my milk cans her face she did show,
With a smile upon her countenance and a laugh in her eye,
If I’d thought that she loved me I’d have laid down to die.

She rejected his advances, turned down his marriage proposal, telling him: ‘The man that has me must have silver and gold.’

So he bid farewell to Polly and to Paddington Green. However it turns out very differently for Polly:

‘In six months she married, this hard-hearted girl,
But it was not a Viscount, and it was not an Earl,
It was not a Baronite, but a shade or two worse,
It was a bow-legged conductor of a tuppenny bus,’

I recall the chorus being included in two popular British films; Sergeant Maxfield in ‘Zulu’ and also Perks the Station Master sings it in ‘The Railway Children.’

(The postcard is from my collection)

One thought on “‘Pretty Polly Perkins of Paddington Green’”