News appeared in the Bolton matchday programme last month that Gordon Quinn had sadly passed away on 10th February after suffering with dementia.

Whilst still at school, Gordon played for the Ruislip Youth Club and he later turned out for the Eastcote Boys Club. Jack Taylor brought him to Loftus Road in August 1952. 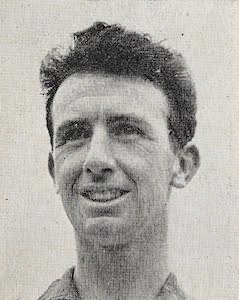 Gordon made his debut on 18th October 1952 against Newport County. He scored what was to be his only first team goal in that game.

Under the headline: ‘New Boy Quinn Starred for QPR’, Steve Kersten wrote the following about him in his match report:

‘It’s hard to believe, but the same men who had been turning in such feeble displays were in QPR’s line-up – except for a youngster named Quinn at inside-left.

It was this twenty-year-old ex-Greenford amateur who made all the difference to the Rangers. Body swerves, excellent ball control plus a calm temperament, make him one of the brightest stars on the Third Division horizon.’

Gordon made a total of 22  first team appearances before signing for Plymouth Argyle in September 1956. He went on to play for the likes of Tunbridge Wells United, Gravesend & Northfleet and Margate.

He later became chief scout at Brentford, but in March 2015, Gordon was living in a Care Home in Kenton.

2 thoughts on “In Memory of Gordon Quinn”