The R’s were confirmed as the Third Division Champions after the 1-0 win at Oldham on 15th April 1967. The following match report appeared in the ‘Green Final’, the Sports edition of the Oldham Evening Chronicle:

‘Queen’s Park Rangers had enough chances in the first-half at Boundary Park this afternoon to have ensured their promotion. Fortunately for Athletic they missed them all…..until the 60th minute. Wilks, the player offered to Athletic by QPR earlier in the season, put the visitors ahead.

Athletic introduced Blair at right-back, and McIlroy put himself at right-half. There were few empty spaces in the crowd before the kick-off.

Athletic opened brightly when McIlroy sent away Blore who slipped the ball out to Bebbington who beat Sibley and went off to cross a fine ball. Wood connected first time to scoop the ball over Hunt but it went wide.

Ian Morgan went up with Sanderson and got Asprey and Lawson in a tangle, but Best confidently cut out Morgan’s cross. Play was held up while Bebbington had attention after a collision with Langley.

Then Rangers went up and slack defensive play let in young Wilks to cross for Roger Morgan to head in, but Best saved.

Asprey went upfield and played a long cross but it beat both Wood and Towers as they ran in trying to connect. Bowie triggered off a move in which Blore and Bebbington made ground, but when McIlroy tried to further it he was sent sprawling and Roger Morgan raced away to slam in a shot over the top.

The crowd booed their annoyance when young Chapman was brought down heavily by right-back Hazell and Springett confidently took Asprey’s free kick.

Athletic won a corner on the left and both goalkeeper Springett and Towers missed Chapman’s cross. Bebbington went off for five minutes treatment.

Athletic got a free kick when McIlroy was again brought down. Asprey put the free kick into the goalmouth but Hunt out-jumped Wood to clear. It was fast, exciting football with both sides making mistakes in their eagerness.

Wood gave the Athletic fans something to cheer when he went off on a good run and finished with a full-blooded, left-foot shot, which Springett saved well.

Play was held up for a moment or two while Keen and Wood received attention from their trainers. At this stage Bebbington and Chapman switched wings.

There was a thrill for the contingent of Rangers’ supporters when Les Allen, their centre-forward, cracked in a shot which hit the crossbar.

Athletic replied with a spirited raid and Towers was brought down inside the penalty area by Sibley, but the referee awarded a free kick on the edge of the box. Bebbington took it and Asprey ran up to hit the ball over.

Two alarms at the Athletic end when Wilks broke through but fortunately Asprey blasted the ball away for a corner and from the kick Ian Morgan had time to crack in a shot but Best saved well.

Wilks caused consternation when he broke through the home defence on the left and was given time to get in a shot, which went wide. Then there was a let-off when he worked in close harmony with Roger Morgan to set one up for the left-winger who hit the ball over the top from a few yards out.

Rangers certainly had chances but failed to make the most of them. Best stopped another shot from Roger Morgan and cleared the ball as Allen rushed in. At this stage Rangers were giving Athletic no respite.

Determined, Wood however transformed the situation by harrying Hazell so much that the full-back had to back-pedal almost from the half-way line before losing the ball and Blore got in a shot which Springett saved.

Athletic had a good chance to go ahead when Bebbington played the ball forward for Towers. Athletic’s top scorer spurned a first-time shot although he was only a few yards out and tried to round the goalkeeper. But Springett fell on the ball and the chance went by.

Roger Morgan blundered again when after good work by Sanderson he had a scoring chance teed-up close into goal, but shot over the top.

Towers was bundled off the ball just outside the Rangers penalty box. McIlroy took the free kick and played it to Wood who headed forward for Towers but goalkeeper Springett beat him to it.

Bowie came running up and blasted in a left-foot shot from the edge of the box, which really tested Springett and Wood and Towers challenged for the loose ball. The centre-forward got his foot to it but Springett managed to turn it over the bar. Half-time: 0-0.

There was plenty of excitement in the first-half with Rangers seeming to have the edge. At times their through ball made the Athletic defence look slow. They had more scoring chances, but did not cash in.

Wood had shown plenty of spirit and dash for Athletic, and had certainly brought out the best in Springett. Best, at the other end, made some good saves.

When play re-started, Bebbington and Chapman were back on their correct wings. Towers went out on to the right and worked with Bebbington whose high cross was gathered by Springett as Wood raced in.

Just afterwards, Springett brought off the best save of the afternoon to deny Wood some reward.

After some early spadework by Blore, McIlroy put the ball out to Chapman and Wood met the winger’s cross to get in a terrific header. It looked a goal all the way, but Springett threw himself through the air to make a spectacular save.

Unfortunately it only delayed the inevitable. Just on the hour, Rangers went ahead when 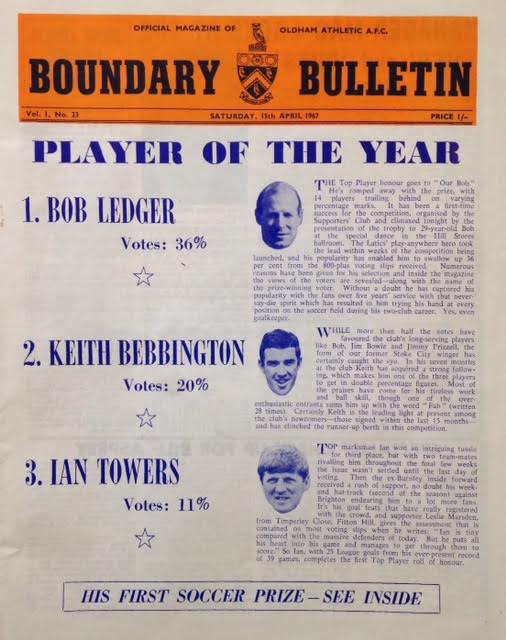 Wilks, the lad Rangers offered to Athletic earlier in the season, put them ahead.

The goal move started deep on the Rangers right, where Hazell robbed Chapman and lobbed the ball forward. Lawson and Wilks went for it together and the young Ranger managed to get his foot to the ball, which bounced into a scoring position for him. He cracked it into the far corner of the net beyond Best.’

I remember a small group of us headed off to Euston to catch the train up to Oldham via Manchester.

Passing us in the opposite direction at Euston Station were hundreds of Scottish fans who were arriving ahead of the match against England at Wembley.

Ken Bates was Oldham’s Chairman at the time and he revealed in his programme notes that he had been an R’s fan as a kid:

‘In welcoming Queen’s Park Rangers today, I have a particularly soft spot for them.

As a kid I stood behind the goal at Ellerslie Road to admire the brilliance of Reg Allen, their young goalkeeper, later transferred to Manchester United, for a then record fee of £11,000.

Alec Stock, the present Rangers manager was in that team at the time……’

The following Saturday, the Oxford United programme notes proudly proclaimed: ‘We’ve made it. We didn’t really doubt that we would, but it is nice to be able to call ourselves Third Division Champions at last.

Our win at Oldham last Saturday clinched it and this match gave us so many pleasant memories that we wished it might have been at home.

In the first place we avenged our only home defeat of the season by Oldham, by getting our own back on them. Our winning goal was scored by Alan Wilks, which was another pleasant thing and is indicative of the accent on youth at the club.

We were also treated to a standing ovation by the sporting fans at Oldham. Both at half-time and full-time, they rose to applaud as we left the pitch and at the end the Oldham players lined up to applaud us on the way to the dressing room.

We are not patting ourselves on the back when we say it is gestures of genuine sportsmanship like this, which make football worthwhile. Thank you Oldham.’

I had been waiting nearly ten years to see the R’s promoted out of Division 3 so I was determined to take the opportunity to witness the team clinch the title with an away win at Oldham.

Yes it was a long trek to Lancashire that day, but the travel cost on the Supporter’s Club coaches was only one pound and ten shillings and in view of the fact that I was earning the princely sum of seven pounds a week at the time, personal finance was not a problem.

In those days there was no proper link-up with the M1 and M6 motorway systems and it was an early 7.30am departure from Loftus Road for the 2/3 coaches to commence our six-hour plus journey.

Once inside the ground our group established ourselves on the half-way line paddock area where most of the other Rangers fans had gathered.

Our mood prior to kick-off was upbeat. Even if we had lost the game the Division 3 Championship was a mere formality. There were still another six fixtures remaining after this to obtain the required two points.

I have to say that the match itself seemed a bit lacklustre and was minus the excitement of most encounters that season, but when Alan Wilks lashed home the winner that was high enough up the entertainment agenda for me….cue QPR chants of ‘Champions! Champions!’ continued through to the final whistle.

When we got back on board the coach for the homeward journey, a group of Oldham fans approached us with intent of doing damage. Indeed, some missiles were thrown.

This was clearly a revenge issue because the Oldham supporters’ coaches were stoned at Loftus Road earlier in the season when they beat us 1-0.

However our coach driver, who had the physique like the wrestler Giant Haystacks, got out to deal with matters and upon his appearance the menacing mob fled!

Yep, I certainly had the taste for this promotion malarkey. Any chance of another in 1968 I wonder?